The vineyards of Vouvray continue to delight and surprise, this week with a wine from Le Facteur. It is a far cry from Vouvray’s image fifteen or twenty years ago, when the appellation seemed to be stagnating. At the time it seemed there were just a handful of domaines turning out good wines, led by Domaine Huet and Domaine du Clos Naudin, with little in the way of change or challenge over ten or even twenty years. At least that is the accepted view; on reflection, looking back from 2020, I do question whether this wasn’t simply down to (in part at least) a lack of interested tasters and journalists willing to uncover new, up-and-coming or simply long-overlooked vignerons. While wine journalists swoop down on Bordeaux and Burgundy every year to taste and opine, how many travel each year to the Loire Valley to do the same?

The story of Le Facteur begins with Matthieu Cosme, one of many younger Vouvrillons I have met over the past decade. A fifth-generation vigneron, he studied in Montreuil-Bellay and Amboise before returning to Vouvray in 2005 to take on the running of the family domaine. This he continues with today, while his younger brother Florent Cosme set up nearby in Noizay, the most easterly commune of the Vouvray appellation (of note, Florent also spends some of his time working for Vincent Carême). Noizay is something of a nursery zone for younger vignerons just setting up, as both land and cellars here are more attainable than those which lie in the shadow of the Clos du Bourg or the Clos Baudoin. 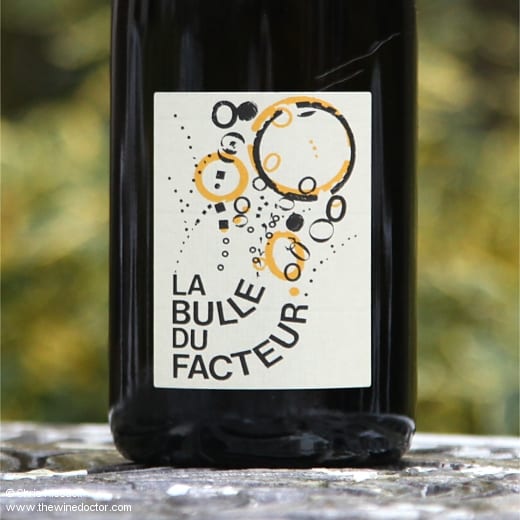 It was in 2007 that time that another young vigneron, Fabien Brutout, arrived on the scene. Having finished his studies he took up an apprenticeship with Sébastien Brunet before he moved on to work Mathieu Cosme late in 2008, taking up a full-time position here in 2011. It was in 2013, probably after a long and Vouvray-fuelled evening, that Mathieu and Fabien created Le Facteur (or The Postman), a small portfolio of wines intended for drinking young, sometimes with the Vouvray appellation, sometimes as Vin de France. The name Le Facteur references an amiable but bumbling postman played by Jacques Tati (1907 – 1982) in the 1949 comedy Jour de Fête, an iconic piece of French cinema which Tati also wrote and directed.

At the moment Fabien and Mathieu produce four cuvées, most of which are sparkling, as exemplified by the pétillant natural La Bulle du Facteur, a Vin de France featured here in the 2019 vintage. Sourced from a number of parcels planted on clay-limestone soils managed without chemical products (and now certified organic) and fermented by indigenous yeasts, the vinification kicks off in 400-litre barrels before being transferred to bottle without added yeast or sugar to finish the fermentation there, the system known as méthode ancestrale. It passes only a few months sur lattes before Fabien and Mathieu disgorge it, too soon for the Vouvray appellation, nevertheless it is fair to say this is Vouvray in all but name. After popping the crown cap the wine released has a fresh, pale-straw hue in the glass, with a lively pétillance. Aromatically it is very fragrant and a little reductive in character, with notes of fresh wet pebbles, with bright apple and pear fruit dressed in herby and floral nuances. The palate is evidently youthful, with a rather foaming mousse at the moment, but give it a few months in bottle and this should settled down. It is certainly bright and lively in style, with a profile of crushed limestone, apple, lemon curd and a fragrant citrus zest, all set in a sappy substance with fresh acid lift. It finishes short, but with a good energy in the finish. Proof that the Vouvray appellation (even if it cannot be declared on the label) is not what it used to be. 92/100 (9/11/20)