I have been drinking several older vintages of sparkling wines from Vouvray recently (“so what’s new?”, I hear you ask). The weekend before last I pulled another bottle of the 2002 Brut Réserve from François and Julien Pinon, a wine I previously reported on in November last year. The curious thing about this more recent bottle of the 2002, compared to the one I popped six months ago, is that the fizz had completely faded, the wine possessing barely a suggestion of salty effervescence. Nevertheless, the flavour profile was wonderfully mature, and after savouring a glass in its slightly tired and unadulterated state I took the decision to freshen it up by blending in some of François and Julien Pinon’s 2015 Brut.

The result was a revelation; the younger vintage, from a ripe year, added texture to balance out the acidity in the 2002, and of course it lifted the palate with its carbon dioxide, now spread across the two wines giving the blend a delicious and delicate pétillance. Vouvray purists may shudder at the thought of this unholy act of amateur assemblage. Indeed, some members of my family thought lockdown had finally sent me insane. Who knows, maybe François Pinon will also recoil in horror at reading this news? Despite these responses, though, the result was worth the effort; both bottles were duly drained. 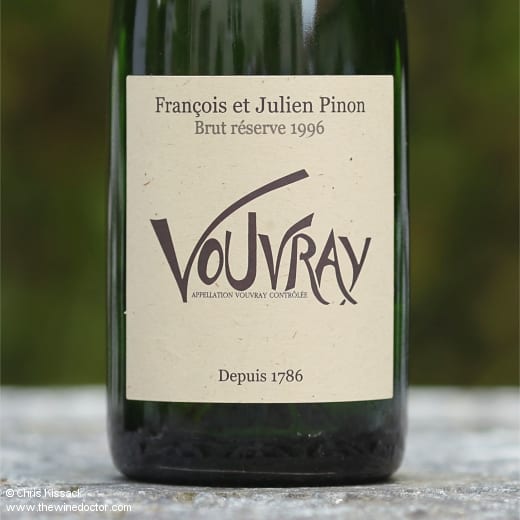 And so this weekend I came to the 1996 Brut Réserve with fingers crossed. I don’t mind experimenting with the 2002 Brut Réserve, as I have quite a few bottles, but I only have a handful from the 1996 vintage. It is from a highly regarded year for the region of course, although to say much more than that would just be repeating myself; for those interested, it is only a few weeks since I gave a recap of the 1996 vintage in Vouvray in my report on another of François Pinon’s wines, the 1996 Cuvée Botrytis.

The removal of the cork from the neck of this 1996 Vouvray Brut Réserve resulted in the softest exhalation of gas imaginable, not entirely convincing, but not disheartening either, as it at least gave something, whereas that 2002 had given nothing. In the glass it displayed a fine straw-gold hue, a little fresher than I recall seeing with the recently encountered 2002 vintage. There is not much evidence of an active bead in the wine, its core untroubled, but within a short period of time tell-tale bubbles begin to appear, scattered across the inner surface of the glass. They offer some hope! Rather like the 2002 vintage this is wonderfully mature in its style, with a classically evolved Vouvray profile on the nose, with scents of saffron, grilled pear, white pepper and dried apples. As for the palate, my immediate impression is that this feels mature, with a slightly cheesy intensity and texture to it, although the flavour profile is dominated by a dried-fruit substance, cut with a chalky vein and a delightfully piquant acidity. It is brilliantly sappy and bright, with a harmonious finish. As for the mousse, there is very little here, but there is a trace, enough to give life to the palate. All in all this is a charming wine, albeit one which demands an enquiring and perhaps slightly forgiving nature in the drinker if you are to truly enjoy it. 94/100 (18/5/20)