Last week I found myself digging through my cellar, pulling out wines from the 2005 vintage, the intention being I should perhaps put together a tasting and new report on the 2005 vintage in the Loire Valley, now that it has hit fifteen years of age. At the same time I was pulling out other wines, including some Bordeaux from the 2000 vintage, a selection of older wines from 1989, 1990 and 1995 as well as a motley collection of older (and some younger) bottles of Quarts de Chaume for drinking. Alongside I was also sorting out my recent acquisitions from the 2016 vintage, and tucking them away where appropriate. In the end I spent the best part of two days lugging bottles, boxes and cases around, isolated in my cellar; it’s my own ‘keep fit while social distancing’ routine. Just don’t expect any videos to appear on social media too soon.

It is not inaccurate to say that midway through my two days of earnest social responsibility (yes, that’s what I am calling two days surrounded by wine) my cellar looked, temporarily, as if a small bomb had gone off (obviously one with magical properties which scattered the bottles without, thankfully, breaking a single one). Many of the bottles which stood all around me had not seen the light of day for more than a few years and reaching into one bin, the contents of which were already largely spilled out onto the floor, I pulled out – to my great surprise – two wines from the 2005 vintage which I thought I had drunk up several years ago. There are no prizes for guessing the identity of the first of these serendipitous finds, from Richard Leroy. 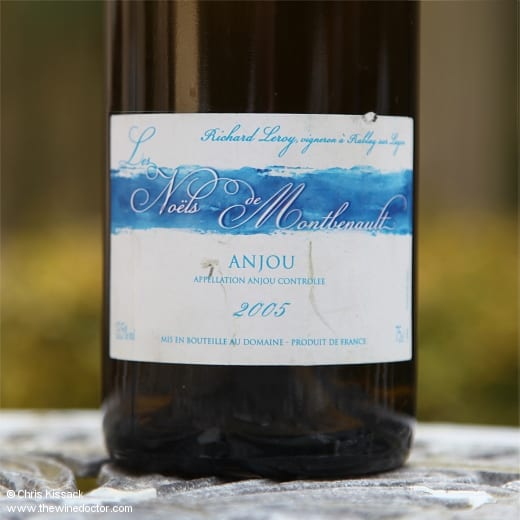 These bottles come from a time when Richard’s wines were less widely appreciated than they are now. Only a few years ago it was easy to buy a six-pack or a case for a fairly ordinary price (depending on your definition of ‘ordinary’ of course), but recent events – namely Richard’s cult status combined with a run of frosted vintages, the perfect combination of high demand and low supply – have conspired to push prices northwards. The wines now occupy second place in the Loire Valley league table for price tag, just behind Clos Rougeard and ahead of bronze-medal contenders such as Nicolas Joly and the Dagueneau family. I have long predicted a significant price rise for these wines, during the course of the past decade, so hopefully Chenin-interested subscribers who heeded these warnings have well stocked cellars of older vintages to fall back on.

The only problem with a cellar full of older vintages is keeping stock of everything and making sure you pull the corks before rather than after the wine keels over. This is a particular challenge with the 2005 Noëls de Montbenault, which has shown some variation in its development over the years. A bottle drank in 2010 was fat and spicy, and arguably too young, but a year or two later it showed a tenser frame, and was more convincing. But then in 2013 one bottle was clearly going down an oxidative road, while a second opened immediately alongside it was fresher and more fragrant. Subsequent encounters since then have tended to resemble the former rather than the latter, and this weekend’s bottle is no different.

In the glass the 2005 Anjou Blanc Noëls de Montbenault from Richard Leroy displays a soft, golden, onion-skin hue. The nose is rich in the scents of baked fruits and Brazil nuts, veering towards notes of raisin and caramel, and it is clearly showing plenty of oxidative development. Nevertheless the palate combines these nutty and smoked notes with that tense style, drily structured and still supported by quite punchy acidity. This latter element jars against the volume and character of the wine at cooler temperatures, but it works well as the temperature comes up in the glass, a good example of how older, richer and more evolved whites often benefit from being served at a temperature often more associated with red wines. This is undeniably pleasant to drink, although I much prefer the cleaner, more fragrant and purer style it displayed a few years ago. If anything, placing it in the context of modern Anjou, it feels rather old-school, a contrast to some of the tauter wines coming from the region’s younger vignerons. Times change, and there is always a new and exciting name to follow and read up on; and we may all have a little more reading time on our hands in the coming weeks, as we all spend more and more time in social isolation. Coming back to this wine, though, my advice is simple and straightfroward; drink up. 93/100 (23/3/20)