While Pessac-Léognan remains the preeminent appellation for dry whites in Bordeaux, there is no shortage of winemakers across the region, on both banks of the Gironde, keen to try their hand at the style. In some cases this reflects a new and more adventurous attitude, especially on the right bank where some – the Guinaudeau family of Château Lafleur and Château Grand Village, and Silvio Denz’s team at Château Faugères spring immediately to mind – have committed coveted limestone terroirs usually reserved for the planting of Merlot and Cabernet Franc to white vines instead. In other cases though, the white wines reflect a heritage which, while indisputable, has been forgotten by many. The Médoc was never purely red; there are several châteaux dotted along the left bank of the Gironde, one example being Château Ducru-Beaucaillou, which have ancient bottles of white wine secreted in their cellars.

It is in Listrac-Médoc, one of two communal appellations of the left bank which lie inland of the ‘big four’, that this unusual historical thread seems strongest. This commune, along with its neighbour Moulis-en-Médoc, remains somewhat unloved and perhaps under-appreciated today. It is the smallest appellation of all those on the left bank, with only half the area eligible for planting compared to St Estèphe, Pauillac, St Julien or Margaux. And of the annual harvest about half the fruit picked is hoovered up by the local co-operative, leaving about thirty active châteaux led by just a handful of key players, including Château Clarke, Château Ducluzeau (as it happens, owned by Bruno Borie, of the aforementioned Château Ducru-Beaucaillou), Château Fourcas Hosten and Château Fourcas Dupré. 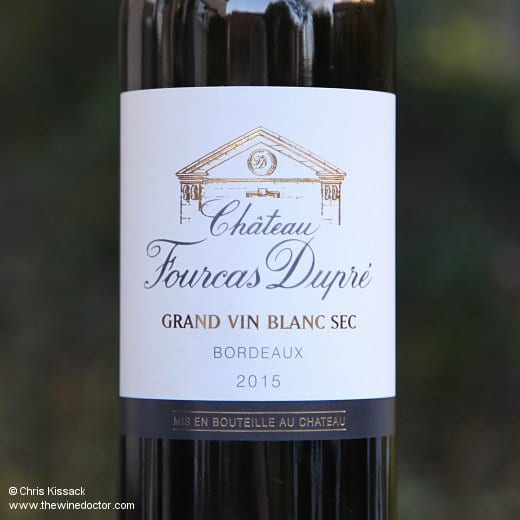 Listrac-Médoc does not enjoy the same deep gravel beds as its more famous left-bank cousins, the terroir here much more varied, smaller streaks of gravel separated by areas of limestone or clay. This means Merlot has traditionally dominated, but perhaps it has also engendered a more open-minded approach to planting, because the region does indeed have a history of planting white vines, beginning on some estates as far back as the latter years of the 19th century. In the 1922 Cocks et Féret the authors discussed specifically the white wines of the appellation;

“These wines are produced from the same varieties as Sauternes, Semillon and Sauvignon, which give demi-sec wines, calling to mind the old white wines of Graves and from around the city of Bordeaux. These white wines have been very sought after for several years, thanks to their ripe but dry character, in the best sense of the term.”

Putting to one side the authors’ confusion at wines both “demi-sec” and “ripe but dry”, the historical precedence seems certain. Indeed, at this time Château Clarke had 10 hectares of white vines planted. Today, maybe half a dozen châteaux in the region have planted white vines, with one of the newest members of Listrac’s white wine club being Château Fourcas Dupré.

The vines at Château Fourcas Dupré account for just 1.2 hectares of the vineyard, split between two parcels, one of Semillon planted on a streak of clay-limestone soils not far from the château, and another of Sauvignon Blanc planted on sandy clay over limestone on the edge of the appellation. The fruit for the 2015 Château Fourcas Dupré Grand Vin Blanc Sec was picked by hand, pressed, allowed to settle and then the juice was fermented in oak barrels, with subsequent élevage with bâtonnage in same. Sauvignon Blanc dominates the blend, and this comes through on the nose which is filled with exotic fruits including mango, guava and passion fruit, but underneath this there are sandy and gravelly elements, polished, with a touch of matchstick. Despite that overture of exotic fruit, this does seem to have a kindred spirit with its cousins in Pessac-Léognan. The palate is cool, with some real substance and texture to it, dry but full and ripe, the vintage as well as the barrel-fermentation and lees-stirring coming though. Happily it is all underpinned by a very firm spine of acidity, and it is lifted on the finish by an edge of bitter grapefruit. This is an attractive wine from a riper vintage which certainly has some appeal. Alcohol 13%. Bottled under a DIAM closure. 16/20 (12/12/16)

Disclosure: This was a sample received from the estate.