When I started out writing about wine on this site (which, in case the question has popped into your mind, was just shy of twenty years ago) I think I would have been quite reluctant to throw the spotlight onto Gamay. The variety was tainted by the legacy of Beaujolais Nouveau, occasionally very drinkable but sometimes just lean and mean, and it seemed perilously uncool. Instead I gravitated towards the likes of Chilean Cabernet Franc (which was probably all Carmenère) and South African Merlot, like a dipsomaniac moth lured by shimmering New World flames. Years later, the irony in my eschewing Gamay on the basis that it wasn’t hip enough, instead drinking super-ripe warm-climate Merlot, is not lost on me.

These days Beaujolais has enjoyed a significant renaissance, although as you might expect I get my Gamay kicks from the Loire Valley. The variety is much planted around Touraine, specifically the ‘traditional’ Gamay also planted in Beaujolais and Burgundy, known more properly as Gamay Noir à Jus Blanc. This is to distinguish it from the red-fleshed varieties also found in these regions, historically used to add colour and body to various wines. And the vignerons of the Côte Roannaise would also want us to distinguish it from Gamay-St-Romain, a specific clone of Gamay Noir à Jus Blanc unique to this region. Coming back to Touraine, the variety seems to do well on the gravelly and flinty soils of this region, and while it does not tend to display the depth and substance it achieves in the Upper Loire it can be deliciously vibrant and packed with flavour, giving me cause to question my expressed preference for the Côte Roannaise. This weekend’s wine is a case in point. 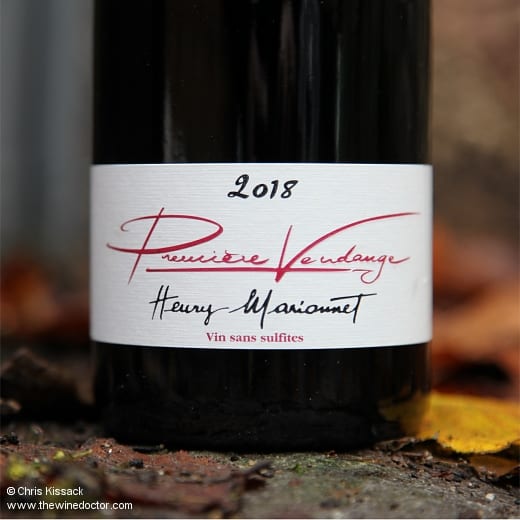 Henry Marionnet of Domaine de la Charmoise has been working with Gamay in this region for decades, and today this work continues thanks to his son, Jean-Sébastien. The vines which give us this cuvée were planted in 1967 and 1978, on soils known locally as perruches, a combination of flinty stones in a mix of sand, gravel and clay. The fruit is picked by hand into small baskets to protect the fruit from damage, and within which they are transported to the cellars where the bunches are emptied into stainless steel vats. Here the fruit is fermented, starting with a little internal fermentation à la carbonic maceration, a process continued by the indigenous yeasts. No cultured yeast is used and, perhaps more notably, at no point do they add any sulphites. Ultimately the wine is bottled, usually in March, still without any added sulphites.

Having tasted other vintages of the Première Vendange Gamay with Henry Marionnet, I have on occasion noticed when the wine is freshly bottled it finishes with a rather funky and yeasty note which seems to be a feature of at least some zero-added-sulphite wines. That was certainly true of the 2017 vintage, although returning to it a year later this anomaly had faded. With that in mind I though I might also take a look at the subsequent vintage. The 2018 Touraine Première Vendange Gamay from Domaine de la Charmoise displays a rich, glossy and saturated appearance in the glass, with a vibrant black cherry hue, which seems to hint immediately at the character of the 2018 vintage. The nose is brimming with fragrant fruit, fresh red cherry, blackcurrant, currants, peony and rose petals and is nothing short of a delight which, over the course of an hour or two, I can’t help coming back to. It is delightfully broad, velvety and rich on the start of the palate, with a full and broad weight of fruit running through the middle, dark, honest, rich and true, undercut at the finish with a flourish of grip, despite there being little in the way of tannin, and wonderfully fresh acidity. What really appeals on the palate is the way the texture relaxes into a silky elegance, without ever losing the delicious fruit substance. With energy and grip, this is a great example of the brilliant 2018 vintage, and of what Gamay – even Touraine Gamay – is capable of. 94/100 (13/1/20)