Standing in the cellars of Domaine du Clos Naudin in Vouvray a few months ago, proprietor Philippe Foreau led a fine tasting through his portfolio of wines. Beginning with a few young (and some not-so-young) vintages of his sec cuvée, continuing with a lone example of the Foreau demi-sec, Philippe finished up with more than a handful of vintages of his sweeter cuvées, of which he makes two, a Moelleux and a Moelleux Réserve.

Vouvray is a complex appellation; where else in France can you find an appellation which allows for dry, demi-sec and overtly sweet wine? And, as if that isn’t sufficient variety, for sparkling wine as well? Other than Montlouis, which just happens to lie on the opposite bank of the Loire, I would suggest nowhere. This is therefore an appellation with obvious potential to confuse, as there is no requirement to indicate sweetness on the label of the wine. Happily most follow the traditional system of dividing up the harvest according to potential alcohol, thereby generating sec, demi-sec and moelleux cuvées (and labelling as such), although some define their wines solely by vineyard of origin. The problem with this latter approach is that one particular vineyard may yield a demi-sec in a vintage such as 2009 or 2010, but a much drier wine in more difficult vintages, as we have seen in 2011, 2012 and 2013. 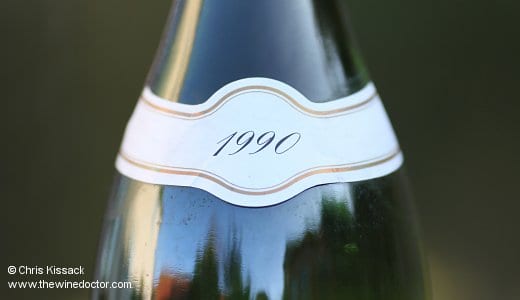 The obvious solution is to follow the Huet approach, labelling by vineyard and sweetness, but the situation can as a result become quite complex, with many different cuvées produced from only a few hectares of vines. This can be challenging for a vigneron to manage, and also confusing for the consumer, especially those who don’t obsess over the appellation and the wines as I (and maybe you) do. I only have to think back to how confusing I found the array of village, vineyard and domaine names in Burgundy when I first explored the region to imagine how Vouvray might look to a wine novice today. And so I wasn’t really surprised, during the course of our tasting, to hear Philippe espouse the simplicity of his portfolio of wines, which is based purely on sweetness, giving – in Philippe’s words – just five cuvées. Philippe concerns himself more with the age of his vines, rather than worrying about individual terroirs. 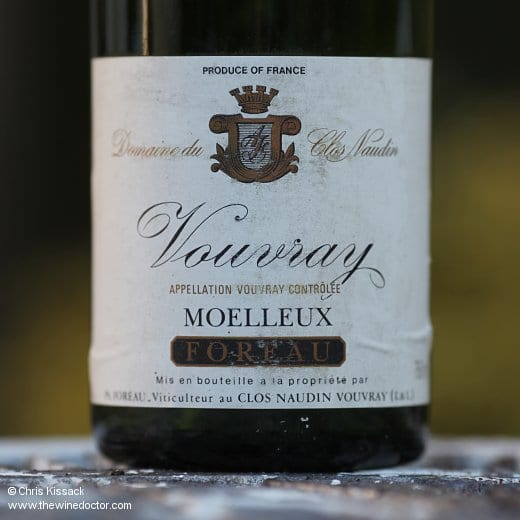 These five cuvées are the sparkling wine, the Sec, Demi-Sec, Moelleux and Moelleux Réserve. Foreau fans will already be writing emails to correct me on this as there is a sixth cuvée, the Goutte d’Or, but as this is a very rare and rather exclusive wine made in small quantities Philippe doesn’t include it in his domaine run-down. Similarly, although there are at least two sparkling wines, the Brut Réserve is simply a late-disgorged version of the Brut (hint for Foreau fans – there is third, even later disgorgement on the cards for 2002, but quantities are bound to be extremely limited). This is quite different to the Moelleux and Moelleux Réserve, where the former relies more on passerillage, the latter on botrytis; these are therefore two very distinct wines.

Just to remind myself what the Moelleux tastes like in a good vintage (this is a tough job, but I think I’m up for it) I recently popped the cork on the 1990 Vouvray Moelleux from Domaine du Clos Naudin. The cork here looks a little dried and contracted at the top, but it still feels soft and seems to be making a good seal still. The wine has a very deep, burnished, caramel-orange hue in the glass. There follows a beautifully expressive nose, full of caramel-drizzled apricots, hazelnut praline, smoky oatmeal and macaroons. There is a little baked honey too, as well as some funky Chenin straw character, but this faded over a day. The palate has a polished, sweet and fleshy start, very broad, with a convincing weight and texture, although it remains elegant, with a silky suggestion to it. There is some interesting flavour complexity here, with a little brûlée note to it, some black tea nuances too, both suggesting botrytis character despite this being the Moelleux and not the Moelleux Réserve. Overall, a very composed and energetic wine, and one with great vibrancy at its core. Excellent quality and plenty of life here. 18/20 (10/11/14)