It has been a Vouvray weekend. You are perhaps now wondering “Isn’t every weekend a Vouvray weekend?”, which seems to me to be a very reasonable question to pose. With that in mind, I think I will throw the spotlight in the direction of Vouvray in my Weekend Wine reports over the next couple of weeks. After all it seems to be Vouvray, more than any other wine, that I have taken to sipping while I type up my notes for a forthcoming review of the 2017 vintage in the Loire Valley (hopefully to be squeezed into the schedule before my next Bordeaux 2018 report, but no promises!).

We start this weekend with a domaine which is now well known to Vouvray acolytes. When I first visited the Loire Valley (which, to be fair, wasn’t even this century) I had not even heard of Vernou-sur-Brenne, arguably (with a nice little run of première côte vineyards overlooking the valley) the most significant commune in the Vouvray appellation, besides Vouvray itself, of course. I certainly hadn’t heard of the Carême family either, although that is perhaps excusable. During the 1990s Vincent Carême’s parents were working as small-scale agriculteurs, having given up on any focus on viticulture their own parents might have had. Vincent, though, was drawn to the vineyard much more than the vegetable plot, and after a few years of study and work experience he founded his own domaine, just as the 20th century drew to a close. 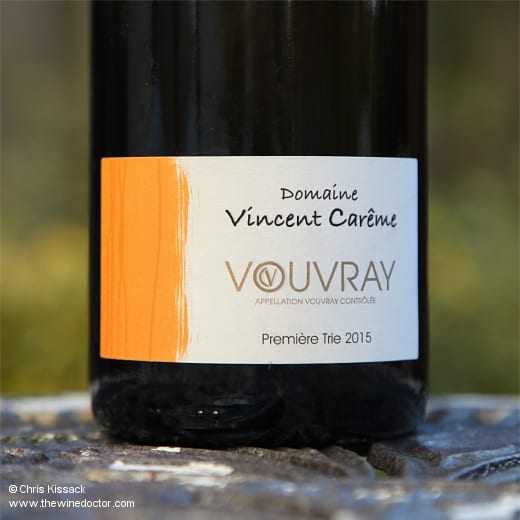 Vincent started out in the 1999 vintage, selling his wines as Domaine de la Haute Borne, a name which his grandfather had used amd which came from the lieu dit of La Haute Borne, on the plateau, where the vines were located. It wasn’t a great year to start out, the harvest dogged by rain, with grey rot a problem. Nevertheless Vincent did a good job; I tasted his inaugural vintage a few years back and it was at least drinkable wine, more than can be said for some 1999s. In the ensuing years Vincent also tried his hand at sparkling styles, inspired by Nicolas Renard and the late Christian Chaussard, two influential figures in the Loire Valley, especially when it came to the pet’ nat’ style. Over the twenty years that have since passed Vincent has honed his skills, in sec, demi-sec and sweeter styles, and tasting all his ‘back catalogue’ a few years ago I sensed significant step changes in quality in 2008 and 2015. The wines are now top tier in the appellation, to be purchased with gusto alongside those of Domaine Huet, Domaine du Clos Naudin, the late François Pinon and a handful of others.

This weekend’s wine is of course one of his sweeter wines. Being commercially astute Vincent does not strive to produce moelleux or richer cuvées in every vintage; indeed, thinking back to older vintages, only the delicious 2009 Moelleux Le Clos pops readily into my head, although on checking my notes (always a good idea!) I see he made a moelleux cuvée in 2005 and 2008 as well. In more recent years, good weather at harvest time, particularly 2015, 2016 and of course 2018, has been ideal for making this style and the frequency of sweeter cuvées coming from Vincent’s cellars has increased. The 2015 Vouvray Moelleux Première Trie from Vincent Carême is sourced from a number of different parcels, selecting mostly nobly rotten fruit, giving a residual sugar of 90 g/l, and plenty of botrytis character. In the glass it has a polished and shimmering golden hue, while the nose impresses with the scents of dried fruits, caramelised apples, pears and sweet tarte tatin, backed up by a chalky and slightly salty minerality. It has a great presence of botrytis but it also suggests fine freshness and vivacity. This is followed by a beautifully succulent substance on the palate, caramelised fruits and grilled white peach and pear, with a citric energy, all infused with powdered chalk, thyme and bergamot. It has a great structural substance and a long and pithy finish. This is a great wine; I will do my best to keep my hands off the rest for a few years (but like the timing of my reports, no promises!). 96/100 (15/2/21)