The man who made this week’s Weekend Wine needs no introduction, certainly not to regular readers of these pages, and perhaps not even to those with a less keen interest in the wines of the Loire Valley. Even Burgundy and Bordeaux-focused wine critics who refuse to throw off the duvet for anything less than a taste of Romanée-Conti, and who conclude their reviews of long-established stars of the Ligérian wine scene on their twentieth vintage with “an up-and-coming domaine to watch”, have heard of Claude Papin. Even if it is just through reading his profile in The New France (Mitchell Beazley, 2002) by Andrew Jefford (which is, incidentally, perhaps the best generalist interpretation of his work I have read).

Claude is today retired of course, and as I noted in my recent Château Pierre-Bise update it is his sons René and Christophe who now run the domaine. Back in 1997, however, he was very much in charge. Readers familiar with the domaine will know it is situated in the commune of Beaulieu-sur-Layon, not far upstream from the famous Butte de Chaume. His principal Coteaux du Layon vineyards, L’Anclaie, Les Rouannières and the Clos de la Soucherie are all gathered close at hand, between the hamlet of Pierre-Bise, nearby Château de Soucherie and the Layon itself. But there is, of course, one other relevant vineyard, and that is Les Rayelles. 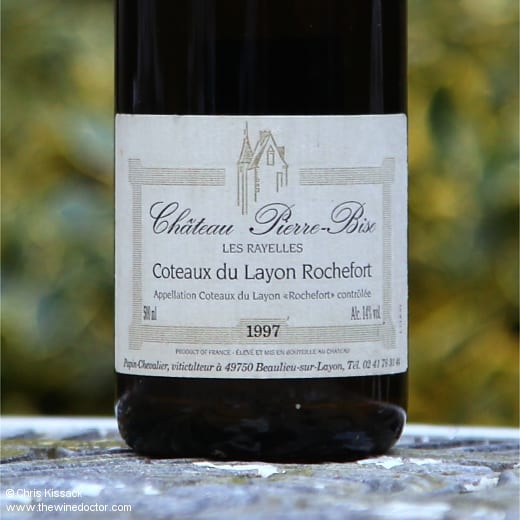 Besides Beaulieu-sur-Layon there are five other communes and one village (for more detail, see my guide to the villages of the Coteaux du Layon) that may append their name to that of the appellation. They all have their distinctions and idiosyncrasies, and the interloper Rochefort-sur-Loire is one of the more unusual. This commune, as the name might suggest, barely touches the Layon (and where the vineyards stretch this far they mostly have the Coteaux du Layon Chaume and Quarts de Chaume appellations), and most of its vineyards in truth look down upon the Loire. This is certainly true of the lieu-dit of Les Rayelles, which sits adjacent to the Papin family’s Haut de la Garde vines, pretty much as close to the banks of the Loire as any vines get. On the opposite bank of the river, yet still 3 kilometres distant (a good indication of the breadth of the floodplain of the Loire), sits the town of Savennières.

While this puts the vines of Les Rayelles on the same schiste-gréseux bedrock that underpins many vineyards along the Coteaux du Layon, it does mean this particular terroir has a north-northwest-facing aspect, different to Claude’s other Coteaux du Layon vineyards which tend to look south and west. Perhaps this facilitates a later picking, because of all the Papin family’s Coteaux du Layon cuvées this often seems to me to be the most heavily botrytised. The 2003 and even more so the lush 2005 vintage have a remarkably rich character, the evident botrytis character reinforced in each case by the concentration and warmth of the season. The 1997 vintage was also favourable to botrytis, but is perhaps a little more classic in terms of style and balance.

In the glass today the 1997 Coteaux du Layon Rochefort Les Rayelles displays an intense, lightly bronzed, orange-gold hue. The nose has a little hint of volatility, nothing untoward with maturing wines heavily set with noble rot, and indeed there is a pile of sweetly botrytised character including praline and toasted nuts coming in here, along with acidulous apricot and orange marmalade, all wrapped up in a little crème caramel richness. The palate feels voluptuous, first giving a nod to the caramelised and toasted nuts seen on the nose, but it is clearly punchy and pithy with good grip and acidity as well, giving it a greater sense of balance than some more recent vintages from this terroir. And it has some delightful black tea leaf and black pepper complexities, the benefit of botrytis and age combined I think. Hugely impressive, rich and spiced with such incredible energy, this is great now but it has many years in it yet. 96/100