With this update on the latest releases from Château Pierre-Bise I bring my reports on the domaines of Anjou to an end this year. Well, in truth that is not entirely true, as I recently made a couple of post-harvest visits in the region, complete with tastings, and naturally there are reports to follow. For the moment, though, consider these words on Château Pierre-Bise the last on this region for a little while, as I turn to the vineyards of Saumur and Touraine instead.

It’s not entirely inappropriate to finish up my Anjou reports with the Papin family of Château Pierre-Bise. This was one of the first domaines I ever visited in the region, nearly twenty years ago now, and I recently uncovered a handful of old photographs from that visit. My favourite is the picture below, of a very young-looking Claude Papin, staring down the lens of my pocket digital camera with a benevolent but also slightly bemused expression. I also think he looks a little tired; I have a vague recollection he had been partying late the night before with some importers (maybe from Japan?), but I could be mistaken in this. 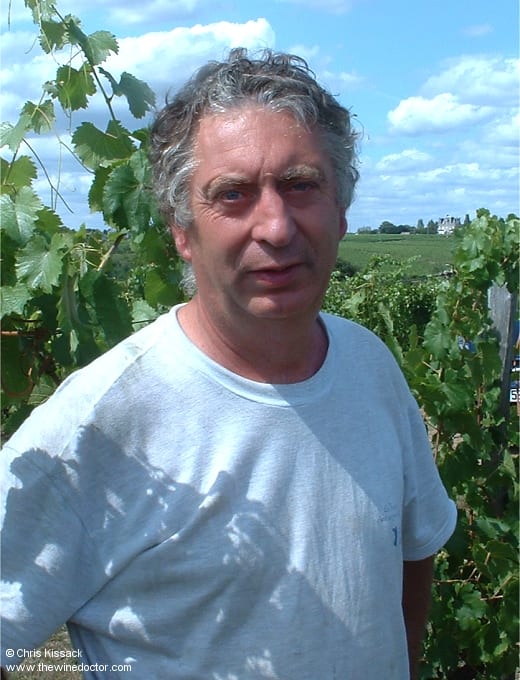 Although I didn’t realise it at the time (one short drive from the domaine and I was completely disorientated), we were standing in Les Rouannières, the lieu-dit which stretches out to the southwest of the property. Looking back at the photograph twenty years on it is only the presence of Château de Breuil in the distance, combined with my vague memories of my day with Claude, that allows me to pinpoint exactly where we stood. It is an emblematic vineyard for the estate, the bedrock underfoot spilite, part of a seam of this metamorphic rock sandwiched between the schists of the Unite de Saint-Georges and the Série de Mauges), a rock which of course also goes by the name of pierre bise.