This week’s wine has certainly had me scratching my head for a little while. I pulled it from the cellar without any great thought, and some time later popped the cork. A tasting note written, it wasn’t long before the bottle had been drained (I did have some help you will be glad to hear), the conclusion being that this was perhaps the best showing yet of this non-dosé cuvée of which I purchased six when I visited the domaine during the summer of 2008. It would certainly do as my Weekend Wine, especially as I have perhaps been a little remiss in featuring pétillant or mousseux Vouvray from producers other then Huet.

It was only when I looked at the image below that something suddenly didn’t seem right. Isn’t this a non-vintage cuvée, I asked myself? That’s certainly how I have written up the wines for Winedoctor before, that is how they are recorded in my cellar records, and having purchased the wine at the domaine you would think I would get the vintage correct. But a little look around on the internet, on blogs, several web fora and even a number of merchants’ websites shows that almost everybody regards this wine as a 2006, and a glance at the label shows why this is the case. 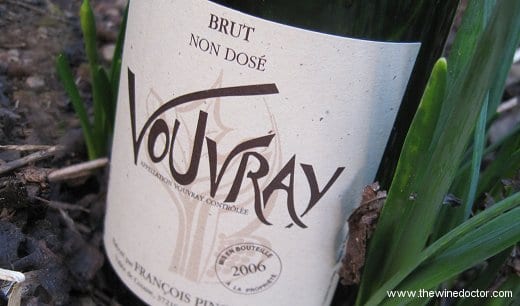 Now I suppose I could telephone François Pinon and enquire, but as I am writing this for publication in a few hours and the time is well past midnight I don’t think that would go down so well. So perhaps some other logic or evidence could be found? I had a hunt for my original notes from my visit in 2008, which would hopefully include some wise and relevant words from the Pinons themselves, as well as my handwritten tasting notes, but I searched to no avail. In the corner of my study there is a huge cardboard box filled with fiches techniques, PR booklets, tasting notebooks and other vinously orientated documents, and although I can usually find what I want my ‘system’ let me down in this instance. I did uncover, though, the 2008 tariff sheet which I picked up at the domaine, and this did yield some clues.

The first is that although Pinon had a number of vintage-specific vins tranquilles for sale, including two each of his Vouvray sec (2006 and 2007), moelleux (2003 and 2005) and liquoreux (2003 and 2005 again), only one of the five sparkling wines listed was vintage dated, this being the 2004 Brut in magnum (which Pinon had been busy corking and capsuling when I arrived). The others, including this wine, the Brut Non Dosé (selling at the domaine for the wonderful price of 6.40 Euros, if you are interested) had no vintage specified. So perhaps it is non-vintage? Even so, that is not to say the base fruit doesn’t originate from a single vintage, as it is quite legal to label such a wine as a non-vintage cuvée; some domaines do this to maintain a consistency in their portfolio year after year, and perhaps Pinon does it in order to avoid changing the bottom section of his tariff? So perhaps others are right to think of it as a 2006, even though Pinon doesn’t appear to?

There is another clue, hinted at on the label but more firmly stated on Pinon’s tariff sheet. The label appears to indicate the wine was mis en bouteille in 2006, and above his prices Pinon declares the wines to be méthode traditionnelle. That means (as I have recently explained in my Champagne guide) primary fermentation as normal, followed by secondary fermentation in bottle, with the addition of yeast and usually sugar to help this along. If the wine had gone into bottle in 2006 it is extremely likely that the base vintage here is 2005 and so it may be that all those writing about the wine as a 2006 are one year wide of the mark. Confusion reigns! The only possible resolution is to go to the source of the wine and so, although I wasn’t prepared to telephone François Pinon in the small hours of the morning I was prepared to fire off a query by email, and this is his response:

And so the wine does indeed originate from the 2006 vintage, bottled in February 2007 in fact, with the addition of yeast (as per the méthode traditionnelle which I have not long explained in detail in my Champagne guide). No sugar was added, that in the wine originating solely from the harvested grapes. Although méthode traditionnelle, Pinon is looking for a lower pressure, so more pétillant (typically 3-3.5 atm) than mousseux (typically 5-6 atm) and at the disgorgement there is no further sugar added. Hence the term non dosé. Thus in a way this wine is very similar to the much-lauded Triple Zero from Jacky Blot. Pinon’s philosophy wouldn’t allow him to chaptalise I am sure, and so with no sugar added with the liqueur de tirage, and no dosage, this wine is also ‘triple zero’.

Anyway, onto the wine, the François Pinon Vouvray Brut Non-Dosé 2006. The label, by the way, is a design created by Pinon’s daughter. This wine has not always been my favourite when comparing it with the straight Brut, which shone when I first tasted it but seems to have faded very slightly since then, whereas this wines seems to be singing more and more. In the glass it has a pale golden appearance, the nose all fresh and floral and smoky, with very bright and precise, crystalline fruit. It has a similar fresh and lively character on the palate, a good substance and a substantial mousse, backed up with deliciously crisp acidity. Overall, a joyful and somewhat minerally style which I find very impressive. I’m looking forward to my next bottle already. 17/20 (15/3/10)