After last week’s Vouvray surprise, the really quite enchanting 2015 Coteau de la Biche from Domaine Pichot, there was no reason not to continue with the same appellation this weekend, albeit on more familiar territory. Regular readers will already be aware that I am a fan of this domaine, as evidenced by the frequency with which the bottles turn up in my Weekend Wine slot and elsewhere in this site. And the generosity of the 2015 vintage has prompted François Pinon, now joined by his son Julien not only in his work at the domaine but also on the label, to produce what is a striking non-dosé version of his ever-reliable Vouvray Brut.

This is a wine which will probably pop up on Winedoctor again some time in the future, quite simply because I have added a good stock to the cellar. Not just bottles, but a decent number of magnums as well, most of which I purchased when I called in on François and Julien during one of their portes ouvertes (open doors) events last year. Portes ouvertes are a great opportunity for anyone to visit (without appointment), taste and buy; it is great for the locals, who can simply wander down to the domaine and load up with festive cheer, supporting the favourite local vigneron in the process. François holds several portes ouvertes each year, some with trips out into the vines as well, and quite wisely he often holds one in the run up to Christmas, when he knows he might sell a few more bottles of his various moelleux cuvées (as well as a few magnums of fizz, I suppose) than he might otherwise. 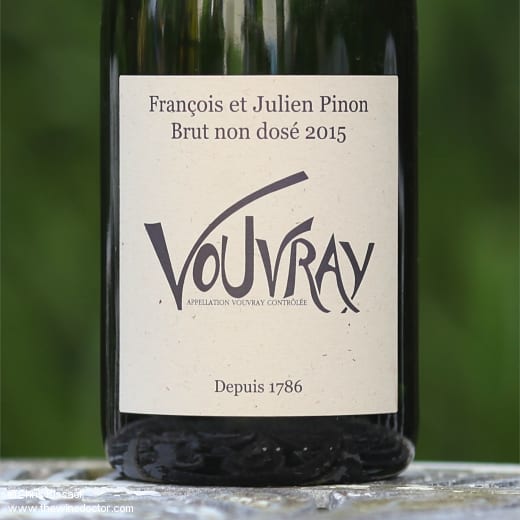 I confess when I visited I loaded up with various bottles, including a few of his 2018 Vouvray Moelleux Goutte d’Or, but don’t expect one of those to be making an appearance anytime soon. Having already opened a 2016 Vouvray Moelleux Réserve from Philippe Foreau last year, as written up in Loire 2016 at Three Years report, I don’t want to develop a reputation for infanticide. Although, having said that, having just popped the cork on this 2015 Brut Non Dosé, I wonder if it might be a little too late to start worrying about that.

François Pinon’s first vintage of his Brut Non-Dosé cuvée was 2006, a shift away from the sweeter styles – such as the sparkling Vouvray Demi-Sec – which were championed by his grandfather, Camille Pinon. François feels his success with the non-dosé style, despite the higher altitude and cooler soils of the Vallée de Cousse where he is based, reflects the warming climate. I suspect he is at least partly right, François being too modest to point out that his meticulous approach in vineyard and cellar must also play its part. The 2015 is the latest vintage, a selection of the best of the year’s juices, which spent three years sur lattes before disgorgement. The alcohol is a very respectable 12.3%, and with no dosage the residual sugar in the finished wine is less than 2 g/l. From magnum it still has a pale, straw-coloured hue (while the bottles have tended to display a slightly richer colour in my experience), with a fine and gentle bead. The nose is great, very expressive, with sour (but not bruised) apples, smoke and vanilla, with a citrus freshness. It continues with a delicious style on the palate, those apples showing again here, vigorous and intense, cut with a crushed-chalk minerality, pointed acidity and a youthful mousse. It is taut, acid-defined, lightly sour in an appealing, mouth-watering manner, and it has piles of energy. It feels very true to the appellation, but the truth is it feels too youthful, acid-bright and taut at the moment, especially from magnum. I will drink the bottles now and over the next few years, but I should really leave the larger formats to rest, for a good few years at least. 94/100 (31/8/20)