This week I will finish up my reports on the 2018 Cru Bourgeois wines with two more tasting reports, looking first at 55 Cru Bourgeois wines in the Haut-Médoc appellation, and then a further 62 wines with the Médoc appellation. Combined with the tasting notes I published last week that makes for 150 wines reviewed (it would have been 151, but for one wine which had succumbed to cork taint). So it seems only right to open week two with another wine that stood out for me during the tastings.

While the Haut-Médoc contingent included a number of familiar names, from the likes of Château Belle-Vue, Château Cambon-la-Pelouse and Château du Retout, all of which were looking good, I was keeping an eye out for wines which impressed me but which hailed from less familiar châteaux. Last week’s wine, the 2018 Château Devise d’Ardilley, its heady blend rich in Petit Verdot, was a prime example. This week’s wine also fits the description; it is from a property I only encountered for the first time last year, during the 2019 Bordeaux primeurs, one of the many samples that turned up on my doorstep back in May 2020. The 2019 vintage seemed to have pretty good potential (it will be good to revisit it one day), and the 2018 vintage, now in bottle, seems just as impressive. 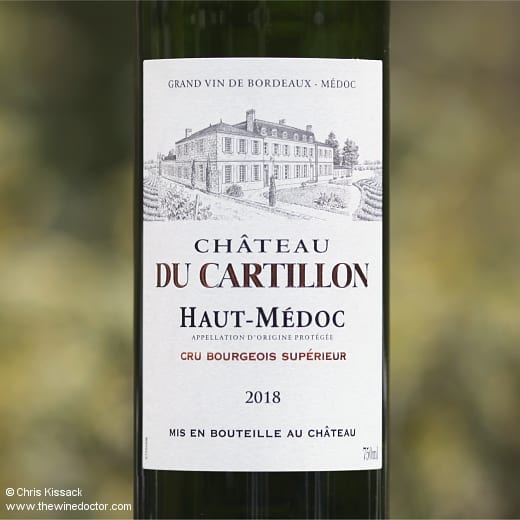 Château du Cartillon is located in Lamarque, which along with Cussac-Fort-Médoc forms a Haut-Médoc ‘hot spot’, home to a number of interesting properties turning out wines of particularly good quality which set the bar for this very broad and varied appellation. One clue as to why this might be can be gleaned from any map of the region; Lamarque and Cussac-Fort-Médoc lie directly between the appellations of Margaux (to the south) and St Julien (to the north), and they sit atop two gravel beds positioned as close to the Gironde as any of these more famous appellations. You do have to ask why, especially when you look at some of the more peripheral terroirs included in the prestigious Margaux appellation, why these two outcrops of gravel do not have a more elevated appellation?

Château du Cartillon sits on the northern periphery of the Lamarque plateau, close to the Jalle du Cartillon which provides drainage into the estuary, and about 3 kilometres from the water’s edge. To give you an idea of what this means, it is a similar distance from the water to Château Grand-Puy-Lacoste up in Pauillac. The château has a long and fairly grand history, as you might imagine from its far-from-understated appearance, as pictured on the label. It has been here since at least the early 19th century, and was included in the first edition of Cocks et Féret, published in 1850. It was at one time in the hands of Alexandre de Bethmann (1805 – 1870), in his twilight years mayor of Bordeaux, although since 2007 it has been in the hands of Grands Chais de France.

The 2018 Château de Cartillon is a blend of 50% each Cabernet Sauvignon and Merlot, cropped at just 10 hl/ha in this vintage, an extraordinarily low yield which suggests they had some difficulties getting on top of the mildew which was a big problem early on in this season. This low figure does not seem to have done the wine any harm though, the nose opening in a very convincing fashion, with toasty blackcurrant, damson and currant fruits, along with a spicy wrapping of oak and some floral, icing sugar nuances. The palate is very convincing, very polished, with a velvety texture, wrapping up some serious ripe and tightly knit tannins, carrying along intertwined damson, toast, currant, leather and vanilla flavours. It has an impressive finish, not fading, the rich fruit set against the ripe and high-quality tannins here. A delicious style, albeit just a touch reduced at the moment, but long and absolutely loaded with rich potential. This is a very impressive result in this vintage. 93/100 (1/2/21)