I sat staring into the distance, having momentarily lost my train of thought. I am fortunate that the window of my study looks out onto the countryside beyond, and to my shame (or perhaps my joy) I am easily distracted by the view. The fields and distant woodland are rich in wildlife, and on occasion I have picked out a fox or a roe deer, skirting a far-flung hedge. Admittedly, the creatures most commonly spotted are carrion crows, or the occasional flotilla of gulls, especially after the farmer has turned the soil, but that doesn’t prevent me looking for any hint of faraway four-legged movement.

The tasting note I had been dutifully typing up was, by this time, already a half-forgotten memory.

It was as these thoughts passed through my mind, my eyes still lazily drifting up and down the third hedge in the distance, that the lorry rumbled around the corner. Rather larger than your average delivery van, it filled the road, yet the driver had no trouble swinging it around, and deftly backing it onto my driveway. Less than ten minutes later he had deposited there the grandest pallet-load of wine this Scottish village has ever seen, before he jumped back into his cab and piloted his camion back onto the open road, en route for his next job, perhaps the delivery of Brexit Britain’s last allocation of French cheeses to the local supermarket. Or a pallet-load of vaccine to the local hospital. Who knows? I pondered this new mystery as I set about unwrapping and unpacking 27 cardboard cases of 2018 Cru Bourgeois Bordeaux. This was going to be a big tasting…. 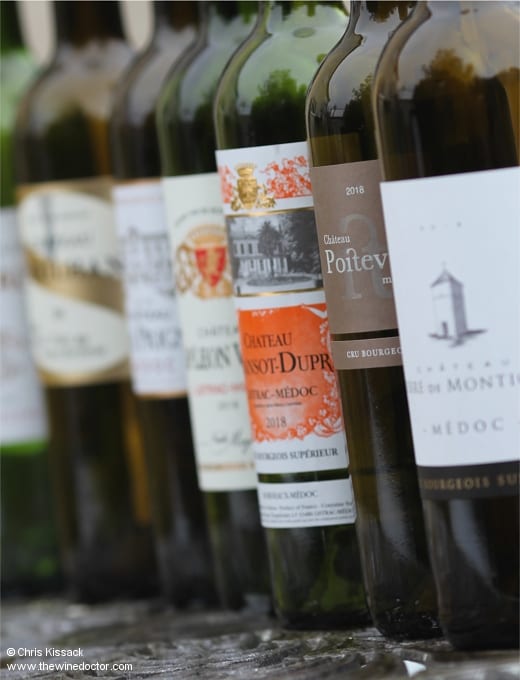 The annual Cru Bourgeois tasting in London is one of the highlights of the wine calendar, for several reasons. First, it provides a window onto ‘real’ Bordeaux, an opportunity to get to grips with a slew of wines that offer both quality and affordability (sometimes even in combination). Some say this latter characteristic is no longer a feature of Bordeaux, but of course this is not the case; you simply have to look beyond the world of the superstar châteaux that otherwise take up so many column inches. Secondly, the Alliance des Crus Bourgeois du Médoc have set the standard for journalist tastings. Some Bordeaux tastings resemble a bunfight, but the Cru Bourgeois tasting is a model of calm serenity, the wines poured at table by experienced sommeliers. It is a system that works so well that some other tastings now follow the same model, seated civility replacing inglorious scrum.