This week I kick off the first of two large reports on the 2018 vintage in Bordeaux. In recent times I have customarily produced two reports at this time of year; usually the first to be published is a detailed look at the year’s cru bourgeois releases, the wines tasted at the annual Alliance des Crus Bourgeois du Médoc tasting in London. The second is my broader in-bottle Bordeaux report, looking at all colours, levels and styles, the notes for which usually originate partly from the Union des Grands Crus de Bordeaux tasting in London, and partly from a week spent dashing back and forth in the region, visiting all the top châteaux.

This year has of course been more than a little different. As a consequence of Covid-19 more than a year has passed since I last stepped foot in a Bordeaux vineyard, my most recent trip having been back in December 2019 (when I was more concerned with rioting Gilets Jaunes and the resulting cancellation of my return flight than I was about Coronaviridae). The annual Cru Bourgeois tasting which had been scheduled for last September was cancelled, and because I was in quarantine at the time I missed the (reputedly very well organised and safely conducted) Union des Grands Crus tasting in October.

Both of my forthcoming Bordeaux ‘in bottle’ reports are thus based on samples sent to my home in Scotland, and while I suppose I could combine all my new 2018 Bordeaux notes into one large mega-report I plan to stick with my usual system. This seems only appropriate for the Cru Bourgeois wines, 2018 being a very significant vintage for the members of the Alliance des Crus Bourgeois du Médoc. This is the first vintage in which the Alliance has switched from the annual ranking, in use since the classification collapsed back in 2003, to a new five-year system. And they have also reintroduced the Cru Bourgeois Supérieur and Cru Bourgeois Exceptionnel rankings. In light of these developments, it seems only right to give this organisation and its members their time in the limelight. 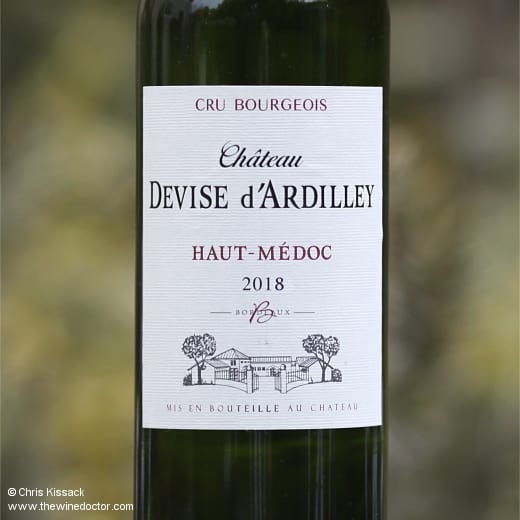 I will provide more detail on my tastings and on the new classification in the introduction to my report, to be published tomorrow, but in the meantime a handful of bottles stood out as worthy of more attention and this wine. from Château Devise d’Ardilley, was one of them. Located just north of Saint-Laurent-Médoc, the property was only created in 1991, after which it was bought by the current proprietors, Madeleine and Jacques Philippe, in 2000. In a region which is sometimes accused of being stuffy and closed to outsiders, Château Devise d’Ardilley is one example which would suggest otherwise; while Madeleine was born in the region, neither she nor Jacques have any prior connection to wine, Jacques having retired from his career as an engineer before they bought the estate.

What really struck me about this wine was the blend; in a region and classification where Merlot usually rules, occasionally usurped by Cabernet Sauvignon, it is always interesting to see other varieties making a significant contribution. During my cru bourgeois tastings I have encountered some distinctive blends, including a 100% Cabernet Sauvignon cuvée (much rarer in Bordeaux than you might imagine) and blends including not just Petit Verdot and Cabernet Franc (although the latter variety is perhaps better known, the former is a frequent choice for blending on the left bank) as well as Malbec.

The 2018 Château Devise d’Ardilley features a whopping 20% Petit Verdot, a variety few châteaux really make a feature of. In the glass the colour is a shimmering inky dark, which seems appropriate, and the nose is perfumed with violets and pencil graphite, with a fresh plum and berry crunch behind. The palate is textured, polished and seamless, with a velvety weight to it through the middle. It feels silky and perfectly knit together, the substance supported by vigorous acidity as well as a firm and nicely grained body of tannins. There is oak here, contributing to the structure, but the wine can cope with it. For a little-known property, certainly new to me, this is a very successful example of the vintage. While this can be enjoyed now, it deserves four or five years in the cellar to see it really come out of its shell. 92/100 (25/1/21)