In this, the first instalment of this 2020 Bordeaux Primeurs report to focus on the wines of the right bank, I feature all those wines tasted from the premier grand cru classé châteaux of St Emilion. Including second wines (and even the third wine in the case of Château Angélus) this comes to a grand total of 19 wines. Although, as two samples are still making their way north to Scotland, presumably by rowing boat across the Channel and then pony and trap up the A1, I expect this figure to eventually rise to the heady heights of 21. Whichever way you look at it, this is the smallest of all my primeurs reports. 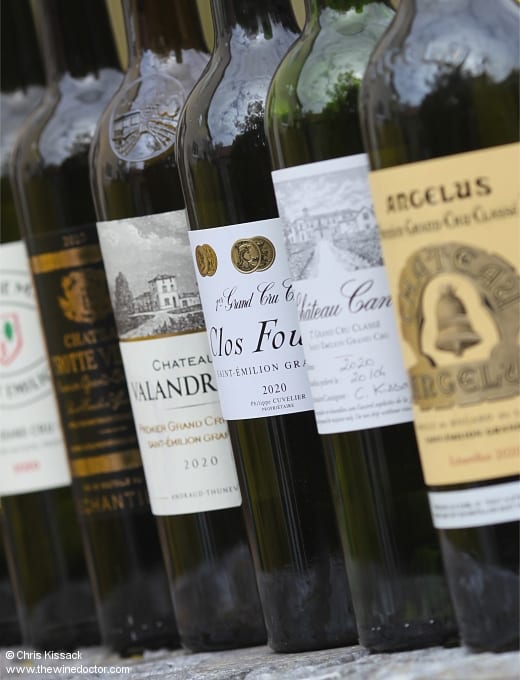 Limited in quantity it may be, but of course it is not limited in quality. Its equivalent on the left bank would, I suppose, be a tasting featuring only the first growths, from Pauillac, Margaux and Pessac-Léognan. So it is not unusual to find some high-scoring wines here, befitting their position at the very top of the St Emilion classification. Of course there are also some that lag behind a little, wines with scores that would look impressive if they were lined up against any other group of wines from St Emilion, or the wider Bordeaux region, but in this small group they are up against some stiff competition. Life’s tough in the premier league, I guess.

It is also worth noting that this category is set to change over the next year or two. The current classification was revealed in 2012, and it is due to be renewed in 2022. Will we see promotions within the ranks of the premier grand cru classé châteaux (this level being subdivided into ‘A’ and ‘B’ of course), or up from the ranks of grand cru classé or even lower? I expect we will, as there are a couple of obvious candidates, both actively shooting for promotion (the dossiers are being compiled for submission as we speak). And how about demotions? That seems somewhat less likely. As of just a few months ago, the legal fall-out of the 2012 classification was still rumbling through the courts, nearly ten years on. But we shall see.