I can recall tastings I have been to (there have been quite a few over the years), hosted by the Institute of Masters of Wine, or by the Union des Grands Crus de Bordeaux, where the turnout from St Estèphe might number just four wines. Or five if you were lucky. Which makes the number of wines from this appellation reported on here, 38 in total, all the more notable.

The performance in St Estèphe in 2020 is, perhaps understandably with such a broad array of wines lined up for tasting, somewhat variable. There are some exceptionally strong wines from the appellation leaders, and there are good-value wines from the top cru bourgeois or unclassified estates which, qualitatively, are nipping at their heels. In both cases these estates serve to remind us that this is not a vintage in which only Merlot did well, as in all cases Cabernet Sauvignon dominates (as it should in this appellation), even if some of these most successful wines feature as much as 45% Merlot. 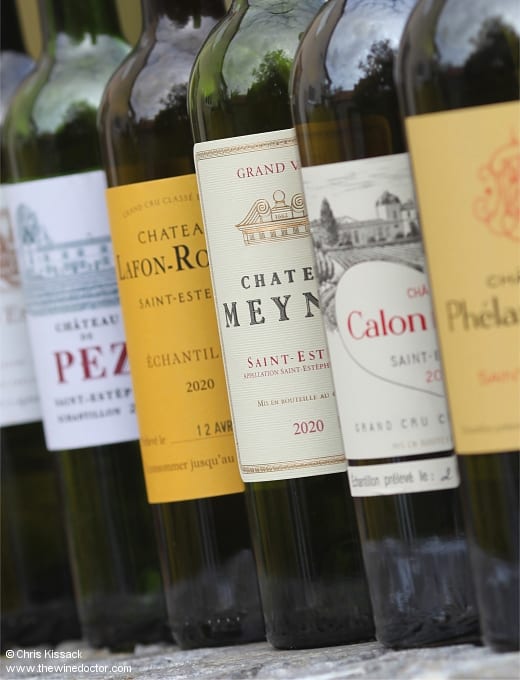 On the other hand there are some wines which feel a little underwhelming, with gritty tannins and austere structures, and one or two feel frankly leafy and herbaceous, I think testament to the difficulties of the vintage when working with Cabernet. There was a need to wait for the berries to gain physiological ripeness, but with each passing day the grapes dehydrated a little more, and the skins thickened and dried. It was a difficult balance to strike, and not everybody got it right. In the words of Dominique Arangoïts of Château Cos d’Estournel, “we began picking the Merlot on September 10th – we could have waited, but we wanted to catch the good balance from the older Merlots. The problem was deciding when to pick the Cabernets, and whether you finished before the rains – we finished picking on September 24th, just before we had 50 mm of rain”.