After two weeks of Cru Bourgeois wines from the 2018 vintage this weekend it was back to Muscadet with this wine, one from a familiar domaine but with an unfamiliar label. I picked this up last year, plucking it from the shelves of a large supermarket near Chinon. At the time I was on the hunt for emergency rations; having just picked up a couple of fresh trout from the fish counter, I needed something suitable to drink. To the wine aisles!

French supermarkets are a mixed bag when it comes to wine; they often carry a lot of big-brand négoce wines, and depending on exactly where you have landed in France can have a big impact of what you are offered. In the Loire Valley the closer you get to Angers the more likely you are to find the shelves crammed with cheap-and-not-very-cheerful Rosé d’Anjou, sometimes entire rows of it. Head up to Tours and you will instead be confronted by a wall of sparkling Vouvray, their gilt-edged labels shimmering with all the elegance of the foyer at Trump Tower (I imagine). They are labels that scream “don’t buy me”.

Look a little longer though, and sometimes you uncover a hidden gem, more often than not hidden in plain sight. I was on my third scour of the white wine shelves when I realised this unfamiliar label was exactly what I was looking for. 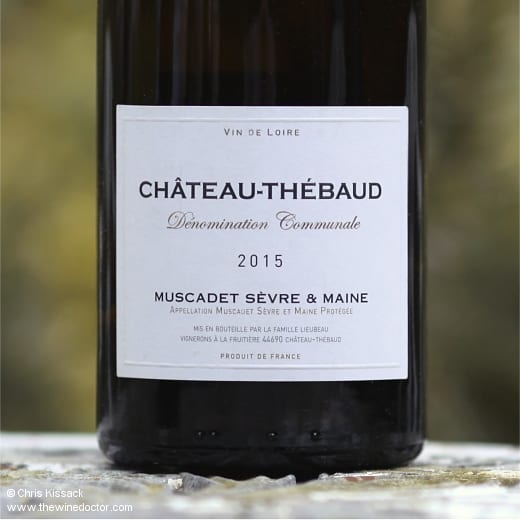 Famille Lieubeau is one of those large but dynamic domaines which is on the way up. Control of the estate now largely rests with the younger generation, François, Vincent and Marie. The entire portfolio of wines (which is pretty extensive) has been restructured, and there is a move to organic viticulture, with some vineyards and wines awarded full organic certification in 2018. At the very least it is a serious domaine to watch, although maybe buying and drinking would be a better strategy that merely watching.

Although the family work in three of the region’s new cru communal zones, they make something of a specialty of Château-Thébaud. When I last visited back in December 2019, at a time when the only thing I had to worry about was my cancelled return flight (preferable to the global pandemic which erupted a few weeks later), we went to view the red granite cliffs of Château-Thébaud, located just down the road from their domaine. That these cliffs and the wines made nearby aren’t better known is a crime, the identity of both lost in the overly broad and amorphous Muscadet Sèvre et Maine appellation. The development of the crus communaux, however, is facilitating greater delineation of subregions and styles, helping to rectify this problem.

After checking out the cliffs we headed back to the cellars for a vertical tasting of the Château-Thébaud cuvée, from 2018 back to 2001, so I already knew the 2015 vintage when I lifted a couple of bottles from the shelves. One I drank with my trout, the other I popped this weekend. The wine comes from vines aged about 70 years, and usually spends about 36 months on the lees before bottling (when I tasted it back in 2019 it was the most recently bottled vintage, the 2016 still in cuve at the time). Now at five years of age the 2015 Muscadet Sèvre et Maine Château-Thébaud from Famille Lieubeau displays a shimmering pale gold hue in the glass. It seems to have opened up a little since I last tasted it, because while I still get that note of crushed white stone there is also a delicious presence of fruit here, richer now, with notes of sweet apricot, apple, pear and orange pip. It feels beautifully broad, sappy and grained on the palate, a textural style, filled with mineral fruit pulled around a tense and pithy backbone. There is great energy and drive here, with a lingering mineral finish. Overall this is very good, and I fear I may have previously under-rated this vintage. What a great supermarket discovery. 94/100 (8/2/21)