Fresh back from some time in the Loire Valley, where I caught the tail end of the 2020 harvest (and I really do mean the tail end – I saw a little picking on the cooler left-bank terroirs in Chinon, and that’s about it), over the past few weeks I have been checking out some early releases from the Loire 2019 vintage. Of course I have tasted plenty from this vintage already, but in the majority of cases these were early samples drawn from cuve, prior to bottling. This is the first Weekend Wine from the 2019 vintage, and possibly the first bottled wine from this vintage to appear on these pages. While tastings from barrel and cuve are always informative (and enjoyable), there’s nothing quite like getting your teeth and palate stuck into the latest vintage from bottle.

The 2019 vintage wasn’t all plain sailing for the vignerons of the Loire Valley. If I think back to the growing season the first factoid that pops into my head is that this was a year marked by a long, warm and dry summer. While this is what ultimately defines the style of the vintage, we must not forget that the year started off with yet another frost. While thankfully it was not as severe as that seen in 2016 or 2017, it was the region’s third frosted vintage out of four. And it certainly won’t be the last; vignerons who have chosen to invest in frost protection technologies have surely made a wise choice. 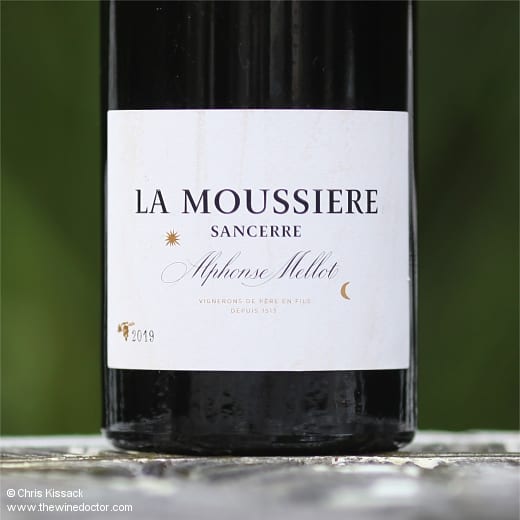 Once the frost period passed, though, as I have already noted summer was characterised by long periods of dry and warm weather which aided ripening, although it made life difficult for young vines and those on well-drained terroirs. The rain held off until late-September, when it helped the maturity and yield of the later-ripening varieties, namely Chenin Blanc and the reds, but by this stage all the early-picked varieties, principally Sauvignon Blanc and Melon de Bourgogne, were in. The wines which are thus most likely to display the effects of the long warm summer are the whites of the Nantais and Central Vineyards. What better wine to choose to check this out from bottle than this cuvée, La Moussière, from Alphonse Mellot?

Perhaps the most widely appreciated of all the vineyards in the commune of Sancerre, the vines of La Moussière sit to the south of the town of Sancerre itself, sandwiched between the lieux-dits of Les Romains, Les Grands Champs and Le Paradis, all of which will be familiar to acolytes of Alphonse Mellot and Domaine Vacheron. The terroir here is largely the Kimmeridgian Marnes de Saint Doulchard, with the equally Kimmeridgian Calcaires de Buzançais at the western end and the Oxfordian Calcaires lités inférieurs to the east. Alphonse Mellot own about 90% of the parcels in this lieu-dit, and while some contribute to the cuvées Edmond and the white Génération XIX, most of the fruit goes into this domaine cuvée. The 2019 La Moussière displays an appropriately pale straw-lemon hue in the glass, while the nose is open and effusive, with scents of crushed chalk, white flower petals, orange pip and verbena, dressed with a subtle touch of menthol. It is expressive but feels broad and generous rather than incisive, and the palate follows this lead, showing big and broad, pithy and rich, brimming with the flavours of orange pith and apricot stone, dressed with chalk, herby daisies and vanilla flowers like the nose. It feels sappy and full of pithy fruit, and its rich flavours are delightful. For structure, though, it relies heavily on its phenolic grip, which persists long into the finish, giving it a warm and confident feel here. The one thing it misses, and in this it resembles somewhat the 2018 vintage, is the precision that would come from a stronger acid frame. It is very much a wine of the vintage, and one those who are averse to acidity would probably enjoy most. 91/100 (19/10/20)