Approaching the Chaume vineyards of the Coteaux du Layon appellation from the direction of the town of Rochefort-sur-Loire provides a good illustration of the Corniche Angevine, the promontory of land which lies between the Layon and the Loire, and its relevance to the region’s wines. By the time you come up to the D54, the main road which runs down from Beaulieu-sur-Layon roughly parallel to the Layon, you are well up on the crest of the corniche. Thereafter the land begins to fall away once again, down to the Layon, and this south side of the corniche provides local viticulteurs with a broad array of steep and largely south-facing slopes to work with. The presence of the Layon at the foot of the slope is little more than a botrytis-inducing bonus.

The D54 marks the top of the Chaume vineyards which then extend down the slope, until it transitions from Chaume into Quarts de Chaume. One small section does extend all the way down to the Layon, next to the Quarts de Chaume vineyards, but most of the Chaume cru lies higher up and, in general, is very open and exposed, which promotes the drying and concentrating of botrytised berries. It is surely this position, admittedly aided by some human interventions such as lower yields (the maximum is 25 hl/ha, 5 hl/ha lower than the rest of the Coteaux du Layon appellation), which elevates the quality of these wines above that of their neighbours. 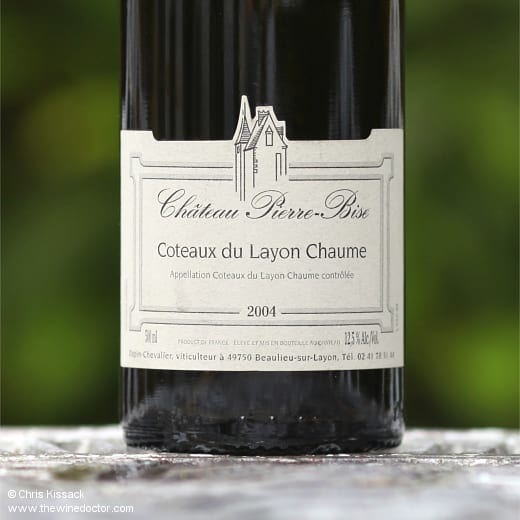 Another powerful feature of the Chaume and Quarts de Chaume vineyards is the terroir. Its geological profile encompasses many of the classic Anjou terroirs, with a large area of schiste-gréseux from the Unite de Saint-Georges in the uppermost reaches of the vineyard, with all its phthanite and quartz complexities, along with outcrops of spilite, the metasomatic rock which runs parallel to the Saint-Georges schist, as well as a little purple schist near the very top of the slope.

Further down the slope, towards the hamlet of Chaume itself, the bedrock largely relates to the Carboniferous Sillon Houiller de Basse-Loire. This is still dominated by schist and schiste gréseux, but it comes with seams of Carboniferous sandstone and a conglomerate puddingstone, which the locals call poudingue. There is also a small area of volcanic conglomerates known as pierre carrée, compacted cinerites and breccia (ejected volcanic material) with tuff (compacted volcanic material, typically ash, not to be confused with tuffeau, a local term for limestone) and a small area of Brioverian schist of the Série de Mauges, although this latter component is of more relevance to the Quarts de Chaume appellation.

The Papin family of Château Pierre-Bise have 2.6 hectares of Chenin Blanc vines in the Chaume appellation, in a parcel planted about 50 years ago. They are situated towards the top of the slope, and are rooted largely on the Carboniferous Sillon Houiller de Basse-Loire with sandstone, coal, cinerite and phthanite. The 2004 Coteaux du Layon Chaume from Château Pierre-Bise has a copper-gold hue in the glass, still looking fresh considering it has already seen its fifteenth birthday. A very expressive nose is characterised by scents of orange coconut macaroons, apricot and quince, smoke and barley sugar. This is followed by a coolly reserved palate filled with creamed quince and coffee grounds on the palate, peppery but with impressive texture and sweetness for the vintage, with an attractively bitter substance. Nuanced by minerally veins, with plenty of smoky, toasty, praline and coffee bean complexity, this has great substance for the vintage, a texturally rich wine but sweetness balanced by nice acidity and a bitter botrytis complexity. It has good length too. For such a challenging vintage, the weather at the end of season far from ideal, this is an impressive result. 94/100 (15/6/20)