A Visit to Domaine Ogereau, October 2020

A Visit to Domaine Ogereau, October 2020

The drive down to the vineyards of the Layon seemed to be taking longer than usual, along innumerate winding back roads none of which seemed familiar. As I pootled through the village of Tigné I realised, as the clock hand ticked ever closer to the time of my appointment with Emmanuel Ogereau, that my fuel tank was running low. Not the car’s fuel tank I should add, but my own. Spotting a boulangerie at the side of the road, I pulled over in order to refuel. One pain au raisin should just about do it, I thought to myself.

As luck would have it my passing through Tigné coincided with the early-morning rush for the boulangerie. Well, I am not sure if you could really call it a ‘rush’; one bemasked customer held pole position at the counter and seemed to be relaying his life story to the madam behind the counter, so I joined the rest of the locals loitering on the pavement outside, doing our best to obey the notion of social distancing. While I waited I mused on Tigné’s distinctive appearance; the predominant building material in this village is faluns, the concreted accumulations of shells left by the Mer de Faluns which covered these parts 15 million years ago, an often-overlooked but important phase in the Loire Valley’s geological history. The result is that the houses, their stone, mortar and render, indeed the entire town, radiates a curious honey-gold hue tinged with orange and pink. Compared to the pale limestone and grey schists used elsewhere along the Loire Valley, it gives Tigné a distinctive glow. 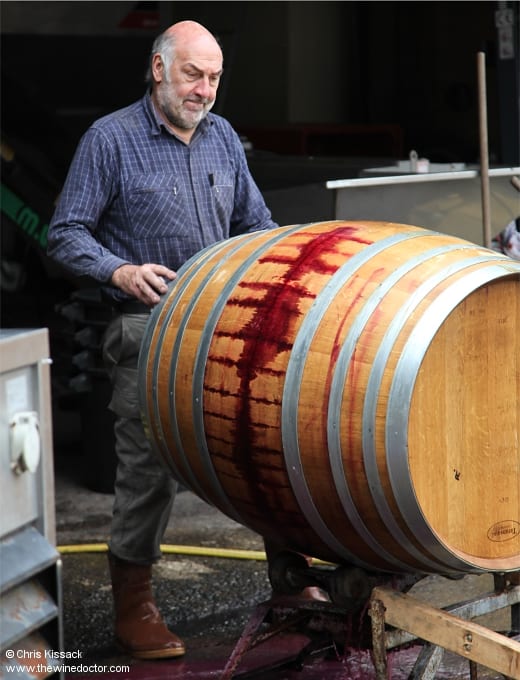 Eventually my turn came, and suitably refuelled I left behind the luminescence of Tigné and headed for Saint-Lambert-du-Lattay. I arrived fifteen minutes late, a rare failure in my efforts to always turn up for appointments with vignerons on time. Vincent Ogereau (pictured above) was occupying himself cleaning barrels in the courtyard, while I found Emmanuel Ogereau (pictured below) ensconced in the cellars. After a few words on recent vintages and the latest parcels on the banks of the Layon to be planted, Emmanuel and I began our tasting.