When I finally closed my laptop at the end of my 2019 Bordeaux primeur tastings not quite a year ago, in June 2020, I breathed a small sigh of relief. Tasting the many hundreds of barrel samples that had arrived at my home in Scotland following the cancellation of the Bordeaux primeurs had been an instructive (and enjoyable) process, one which brought unanticipated benefits as well as the expected drawbacks. On the one hand, I had tasted a great range of wines, including a number of cuvées new to me. And I had been able to taste (and retaste) them at leisure. On the other hand, I never really felt immersed in the vintage, in the way I would when spending a week or two in the region, speaking with négociants, consultants, managers, technical directors and proprietors. Not even the prolific number of Zoom tastings I participated in could replicate that.

Never mind, I thought to myself as I clicked shut the laptop lid, at least I will be able to return to Bordeaux in December, and jump feet first back into the 2018 Bordeaux vintage, in my post-bottling tastings.

Looking back at my concluding thoughts, many months later, they now seem more than a little naive. Travel restrictions, or the “sanitary measures” as many of my French correspondents call them, were relaxed during the summer, but the result was a second wave of Covid-19, slowly rumbling along at first but, as the end of the year drew near, it began to build in intensity. Before long both France and the UK reintroduced travel restrictions, and France closed her borders once more. It was clear that there would be no trip to retaste the 2018 Bordeaux vintage from bottle. At least, having seen which way the wind was blowing, I had not made any travel arrangements this time. Like many my air and rail tickets for the primeurs had been transformed into vouchers, which I suspect will expire before I have the opportunity to use them. I may have been naive when it came to my thoughts about how long the Covid-19 pandemic would rumble on for, but I do at least learn from past experiences. 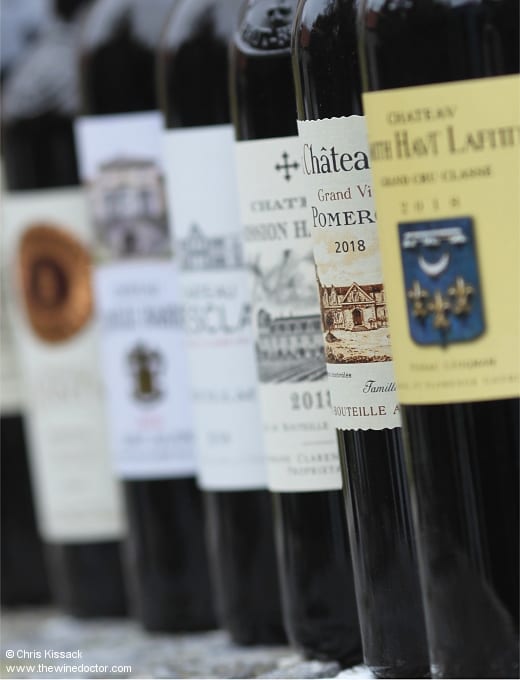 With a feeling of déjà vu and perhaps a hint of despair I looked at possible alternative plans to revisit the vintage. Pushing back my trip into 2021 seemed difficult, as the later-than-usual Bordeaux primeurs (scheduled for late April), the postponed Salon des Vins de Loire (also in April, but since cancelled altogether) and the postponed Wine Paris (in June) were already jostling for position in spring and early summer. I was still scratching my head wondering what to do when the offers of samples to be delivered to Scotland began to roll in; thanks go to Florence Cathiard and Jonathan Maltus, who were the first in the region to get in touch. Within a couple of weeks the samples began appearing on my doorstep (or driveway in the case of fully loaded pallets), and the scene was set.

Clear the kitchen table! Pass me the Zaltos! Fetch my spittoon! Make up, please! Lights, camera, Zoom! It was time to do it all again, with 2018 Bordeaux.