The Wertheimer brothers Alain and Gérard, the same Wertheimer brothers that own the fashion house and perfumer Chanel, entered the exclusive club of Bordeaux proprietors with the acquisition of Château Rauzan-Ségla in 1994, having narrowly missed out on the acquisition of Château Latour in 1993 when they were pipped at the post by François Pinault. Château Rauzan-Ségla required a huge amount of investment, but with no shareholders to answer to (even today Chanel remains privately owned) and a long-term vision the brothers clearly felt justified in their actions. And, thanks to their commitment, there was success too; the wines of the downtrodden Margaux estate showed tangible improvements.

Nevertheless, the brotherly duo do not seem to have been satisfied with Château Rauzan-Ségla alone (having had Château Latour in their sights but then settling for Rauzan-Ségla perhaps meant they had a little spare change lying around), so when just two years after their first purchase Château Canon came on the market they and their manager John Kolasa snapped it up. Like Château Rauzan-Ségla this was a fairly dilapidated property which required major renovation and rescue of the vineyards, a process that continued on for many years (and in fact is still ongoing). But, as I have indicated above, the Wertheimers clearly have the will and the financial clout, and what they have achieved at these two properties is remarkable. I provide more detail on their work below, but first I have some history – starting long before the arrival of the Wertheimer brothers – to offer.

The vineyards of Château Canon, which lie on the road running west out of the town of St Emilion itself, near the heart of the St Emilion appellation, originate from a small vineyard planted around the Church of St Martin by Jean Biès in the early 18th century. At this time the estate was known as Clos St Martin – this being a true clos, a vineyard encircled by a wall – rather than Château Canon, as it is known today. The origin of the modern name perhaps becomes a little more clear when we see that in 1760 Jean Biès sold his 13-hectare vineyard to a man by the name of Jacques Kanon. 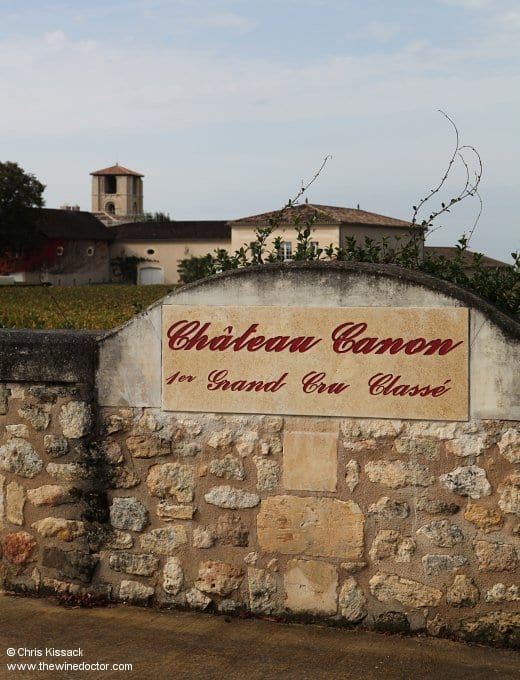 Jacques Kanon (1726-1804) was born in Blaye, to Antoine Kanon (1701-1778) and Catherine Roquillet (died 1744). As a young man he seems to have made a fine living as a privateer, which is essentially a polite term for a pirate. By 1756 he was operating in the English Channel out of Dunkirk, and he enjoyed considerable success, capturing a number of other vessels, some considerably larger than his own. His exploits no doubt brought him to the attention of the French admiralty, and he was commissioned as a lieutenant de frégate in the navy. At first he continued his work in the Channel but in 1758 he was given the command of the frigate Valeur, and later that same year he commanded ships sailing out of Bordeaux bound for Quebec, perhaps France’s most prized foreign territory. By 1759 Jacques Kanon was in charge of entire convoys of ships carrying provisions to the New World, and bringing back valuable cargo; for doing so he received a salary of 200 livres (the livre was the currency that predated the franc) per month, as well as 2.5% of the profit generated by any prizes captured along the way, and also 50 tons of cargo space to use as he wished. No doubt he made a handsome profit. What better way to invest it than in the purchase of a grand estate in Bordeaux, the port and region he knew so well?