Although I recall first meeting Juliette Bécot back in 2006 it was several years later that I first visited Château Beau-Séjour Bécot. It was a miserable March day, the sky grey with a fine drizzle which permeated the air around the château and seemed to drift lazily through the vineyards. In front of me lay a sea of vines and yellow wild flowers, the latter at least lending a splash of colour to the scene, hinting at the tantalising joys of spring yet to come, providing a welcome contrast to the dreary weather. Beyond the vines lay the Romanesque church of St Martin de Mazerat and its extensive cemetery, a rather crowded enclosure crammed with every imaginable style of tomb, cross and gravestone. Some tombs were pristine, protected from the elements by little greenhouse-like affairs, whereas others have been worn by the years, the stones encrusted with lichen, the iron railings and crosses that surround these old graves coated with a deeply coloured layer of rust. As an ensemble, the church and gravestones make for an imposing sight.

This church and the Beau-Séjour Bécot estate are not neighbours by chance though; indeed, the latter owes its existence to the former, as do the other neighbouring châteaux, Château Canon and Château Beauséjour-Duffau-Lagarrosse. To understand how these four entities are related we need only to look back a few hundred years to the origin of the vineyards; you might not be surprised to learn that, as is the case with many vineyards, they started life tended by ecclesiastical hands.

The estate we know today as Château Beau-Séjour Bécot was once part of the much grander (and larger) Beauséjour estate, long since divided, which had a history that spanned many centuries. Its origins lay in the Middle Ages, when the land was in the ownership of the monks of St Martin, monks who also tended the vines in what would one day be the vineyard of Château Canon (which is also located just to the side of the aforementioned church of St Martin de Mazerat). During the 17th century, however, the ascetics relinquished control of their vineyards, and one particular lieu-dit named Peycoucou, a name rather romantically thought to be derived from the singing of the cuckoos (coucou) on the hill (puy), was acquired by the aristocratic Gères family. It is therefore with the Gères family that the story of Château Beau-Séjour Bécot begins. 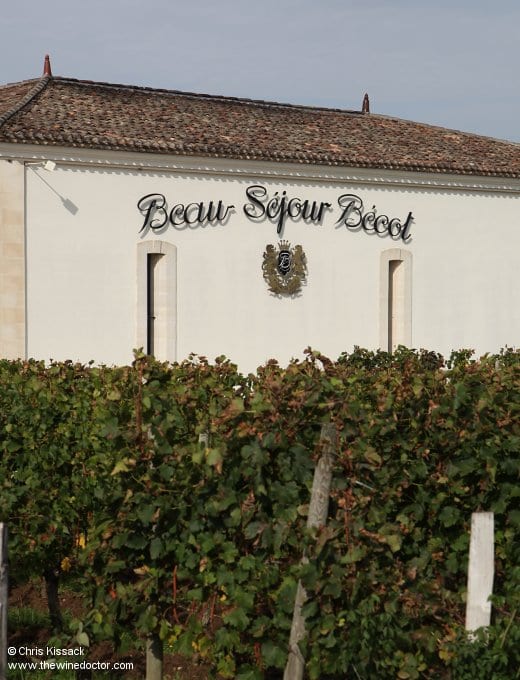 The Gères family have an enviable history; I have documented the ancestry of many noble families in my Bordeaux and Loire profiles, but I recall none that can directly trace their bloodline back as far as the 11th century. The line began, as far as records tell us at least, with Jean de Gère (1021 – 1100), seigneur of Saint-Gemme, who was an impressive 79 years old at the time of his death. It was Arnaud Guillaume de Gère (born 1397) who settled in Camarsac, and his son Bertrand married Catherine de Canteloup, dame of Camarsac, in 1450. Thus the family held the seigneurie of Camarsac, in the Entre-Deux-Mers, for many years afterwards. With the generations other seigneuries, including Sayes, Tauzia, Maurion and Maubousquet came into the fold.