As I continue to wade through my Bordeaux 2019 reports this week, I thought it might be instructive to cast my weekend spotlight not towards the Loire Valley (you might have noticed I tend to feature this region a lot), or indeed Chenin Blanc from anywhere (last Saturday apparently having been Chenin Blanc Day), but to Bordeaux. And in the direction of a château which illustrates the fact that the apparently time-honoured tradition (which in truth only dates back a few decades) of selling your wine en primeur is not the only route to success in this region. Some proprietors have chosen to plough a different furrow, and in some cases they have reaped the rewards.

One such proprietor is Andrew McInnes, who has a collection of cru bourgeois properties up in the Médoc appellation, just down the road from Château Preuillac and the town of Lesparre-Médoc. His three estates are Château La Cardonne, Château Ramafort and Château Grivière. I confess it is only a few years since I first encountered the wines, during the Bordeaux primeurs, at a tasting with one of the region’s best-known consultants if I recall correctly. They stood out for their combination of dark fruit, rather svelte texture and an unanticipated sense of polish to the tannins, desirable features in any wine and which are far from universal this far north on the peninsula. 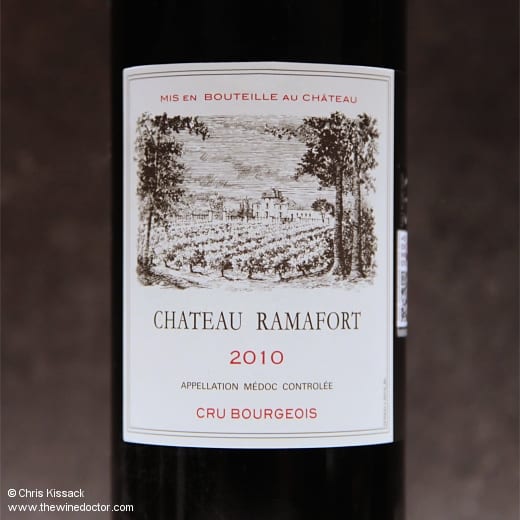 So, coming back to my introductory comments, there is another feature of these wines that makes them stand apart, and that is how Andrew chooses to commercialise them. Key to his practice are the estate’s cavernous subterranean cellars (something else far from universal on the Médoc), which were built back in 1990 and which are sufficiently capacious to hold multiple vintages of bottled stock. As a result Andrew has taken to selling his wine at a later stage, when it is getting into its drinking window. It’s a great system for consumers, because it brings mature vintages to the market, in good volumes and often for a good price. I bought this particular bottle only a few months ago (in France, in the pre-Covid era) using a low denomination banknote, and I had sufficient change left over to buy a baguette. And some cheese.

A blend of 50% each Cabernet Sauvignon and Merlot, the 2010 Château Ramafort has a fine colour in the glass, dark and concentrated, the dusty-claretty rim suggesting a little maturity (even if we hadn’t seen the label!). There is a charming evolution on the nose, with macerated blackcurrant and black bean, a marker of the concentration and ripeness of the vintage, swirled here with nuances of chalk dust, river gravel, vanilla and oyster shell. Medium-bodied on the palate, nicely textured, the dark and macerated fruit wrapped up in tobacco, leather and chalk here, with a still-firm structure of tight and grippy tannins and a firm acidity. In its structure it feels very typical of 2010, and it is very enjoyable with it. All in all this is a nicely composed wine, with a moderately long finish, charming and classically evolved. It looks good for drinking now although it has many years left in it yet, so there is no rush. Château Ramafort, and the wines of Andrew’s other châteaux, are clearly well worth looking out for. 93/100 (22/6/20)