Unless you have been living under a rock (and I should say I have nothing against it if you have) you probably already know the Loire Valley has enjoyed an unprecedented run of good vintages recently, particularly when it comes to the region’s red wines. Every vintage from 2014 onwards has something to offer, with richer styles from 2015 and 2018, and slightly tauter, more classically styled wines from 2014, 2016 and 2017 (these are gross generalisations, admittedly). This seems to have influenced my drinking recently, as this is the third consecutive Weekend Wine slot to feature a Ligérian red.

After a rather classically styled Cabernet Franc and a somewhat richer – you might say more ‘modern’ – blend of the two Cabernets, this week it is the turn of a less widely planted variety, Pinot Noir. And I do mean less widely planted than both Cabernets; the leading appellation for Pinot Noir is Sancerre, with a little over 400 hectares planted. Add a few hundred more for the other appellations of the Central Vineyards, Touraine and the Massif Central and you surely still have less than a thousand hectares. Meanwhile, Cabernet Sauvignon boasts over 1,200 hectares, and I suspect I need not tell you that Cabernet Franc is way ahead, with something in the order of 15,000 hectares. 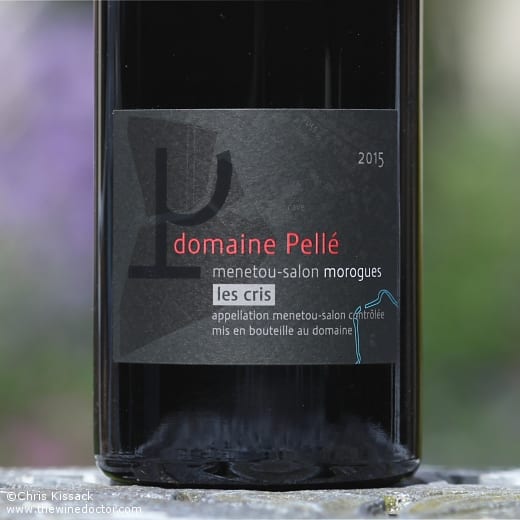 While Sancerre is undeniably the ‘go to’ appellation for Pinot Noir, do not overlook Menetou-Salon, where a handful of vignerons are turning out some really exciting wines. Paul-Henry Pellé of Domaine Pellé is one; alongside a super range of whites he produces a sextet of reds; these include an uncomplicated and quaffable Sancerre, and five wines in the Menetou-Salon appellation. Two of these are particularly interesting single-vineyard cuvées, Le Carroir and the more convincing Les Cris. This latter cuvée is sourced from vines situated above the entrance to the cellars, and which were planted by Paul-Henry’s father back in 1967.

The soils are part-Kimmeridgian and part-Portlandian, and the vineyard 9 hectares in total. Only the central 5 hectares are channelled into this cuvée, the fruit fermented in oak vats by indigenous yeasts, followed by pressing, blending of free-run and press wines, and then élevage in a mix of oak cuves and 400-litre barrels. It is usually the crème de la crème of the domaine’s Pinot Noir harvest, although in special vintages Paul-Henry may also produce Coeur de Cris, a micro-selection from the parcel with more oak influence in its youth; it’s a rarely encountered wine and off the top of my head I am not certain I have ever encountered a bottle. No matter, because the 2015 Menetou-Salon Morogues Les Cris from Domaine Pellé has plenty to offer, starting with a darkly pigmented but translucent hue in the glass. It impresses with an evolving nose redolent of dried cherries, coffee bean and sweet leather, concentrated Pinot character perhaps with a touch of wood. I also see a sliver of meaty evolution here, the aromatics complicated by notes of woodland mushroom and black truffle. It feels stylish, cool and refined on the palate, with a peppery energy and a chalky substance, all framed by a fine grip, which supports all the leather, tea leaf and black truffle complexity seen on the nose. This is a delight for drinking now, with fine texture, substance and length, although I think it is still on an upwards trajectory, and it would good to see how this looks in another three or four years. 94/100 (21/6/21)