“The inhabitants of the village, who have for a long time been delivering their wines under the name of Chavignol, still mention this on the labels of their Appellation Contrôlée Sancerre wines. This is not simply the obligatory inclusion of their address on the label, but is a subtitle which takes on such dimensions as the name of Sancerre seems eclipsed…”

One of the most ancient villages of the entire region, there has been a settlement at Chavignol since at least the time of Saint Romble. This 5th-century priest is famed for founding a convent at Château-Gordon on the banks of the Loire, just two kilometres north of the town of Sancerre. When the convent accepted the relics of the deceased Saint Satur, once a procurator in the palace of Huneric in Carthage, it began a transformation that saw it grow into the L’Abbaye de Saint-Satur, and the town that grew up around it took the same name.

The famed Saint Romble also had some talent as a firefighter though. In his Lectio VI it is written “incendium Cavillone signo crucis exstinxit”, the devout priest apparently having extinguished a fire at Cavillone, surely the modern-day Chavignol, by making the sign of the cross. Regardless of the veracity of Saint Romble’s claim, this indicates there was a settlement at Chavignol at least fifteen centuries ago. Has the vine been growing on the slopes around this settlement for just as long, I wonder? In my personal opinion, I would be surprised if it had not.

Today Chavignol, which is located just a few minutes drive to the west of Sancerre, is one of the prettiest hamlets in the region. It rests in a privileged position in a valley, no mere scratch in the landscape as we find at Bué, but a deep and forked cleft above which tower several striking slopes of Kimmeridgian limestone and marl. Here we find two of the Sancerre appellation’s most famed lieux-dits, Les Monts Damnés and Le Cul de Beaujeu, which are together responsible for some of the region’s most sought-after wines. The notoriety enjoyed by Chavignol today is due not to its ancient origins, but to the quality of the wines which come from these two great vineyards (although it is only fair to point out that part of its fame is down to the renowned goat’s cheese, the jewel-like Crottin de Chavignol).

The renown enjoyed by this village and its wines has resulted in Chavignol developing an independent identity and perhaps a superior status within the Sancerre region. This was evident to Pierre Bréjoux, a high-ranking official at the Institut National des Appellations d’Origine when he visited. It was this that he was referring to when he noted in Les Vins de Loire (Parisienne d’Editions Techniques et Commerciales, 1956), from which I quote at the top of this page, that the name of Chavignol on the label seemed to take on a greater importance than the name of Sancerre, the recently introduced and supposedly all-important appellation. Indeed, even today, many of the vignerons in Chavignol have a pride in their village and their wine that appears to take precedence over any allegiance to the broader Sancerre appellation. 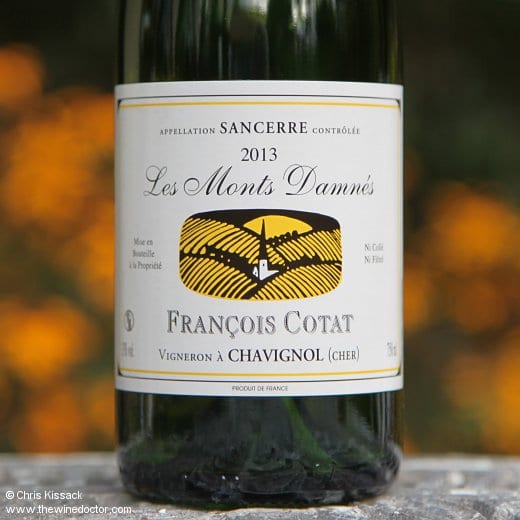 There is of course historical precedence for this, as for many years before the appellation contrôlée system was created and the Sancerre appellation was defined they sold their wines as Chavignol. Even today, some vignerons – such as Nady Foucault of Clos Rougeard, whose partner is Anne Vatan of Clos le Néore – continue to speak of these wines as from Chavignol rather than from Sancerre, in a manner which can ruffle feathers in a certain hilltop town a short distance to the east. And if you look at the labels (such as the one pictured above) used by one or two Chavignol vignerons the name Chavignol does indeed eclipse the name Sancerre, literally so, as it is printed using a larger typeface, a very subtle but nevertheless undeniable subversion. These wines are, regardless of what appellation they might be legally required to use, Chavignol first, and Sancerre second.

Having visited the Sancerre appellation many times, and having called in on the vignerons of Chavignol more frequently than any others, I feel that the pride exhibited by the inhabitants of this small hamlet seems more than justified. These are the most striking wines of the entire Sancerre appellation. All that remains for me to do now is to try to explore exactly why that might be.