Denis Durantou is a name which needs, I suspect, no introduction. The later proprietor of Château L’Église-Clinet, he was responsible for having lifted the fortunes of his Pomerol property to a level where it regularly challenged the very top châteaux in the appellation, including Petrus and Le Pin, for their crown. He made giant-killing wines which should not neither be under-rated, nor overlooked. It was a tragedy when, in 2020, he passed away, far too soon.

Denis was a true vigneron, a man who knew that the quality of his wine comes not just from his hard work, but from the character of his terroir. He understood and valued good terroir, regardless of whether it be in Pomerol or in some less exalted appellation. The limestone scarp of Castillon is one example; Denis was seduced by it, and as a consequence in 2009 he bought Château Montlandrie. This was not, however, his first foray beyond the borders of Pomerol; almost a decade earlier Denis had established a foothold in Lalande-de-Pomerol. The property he purchased here is Château Les Cruzelles, and the wine he made from this estate has long been worth knowing about. 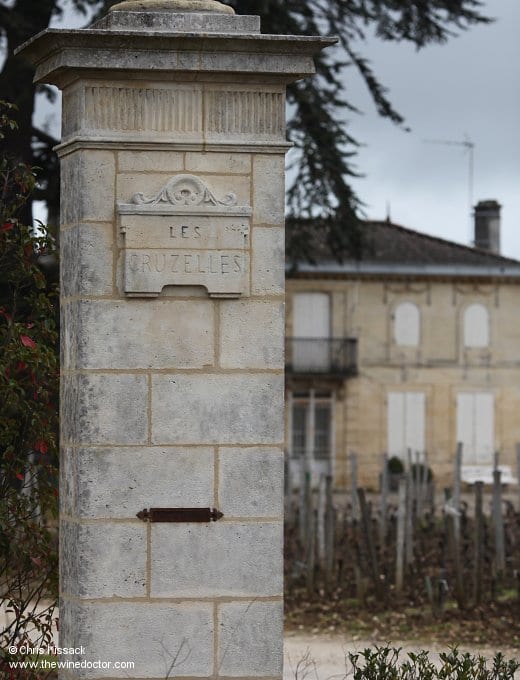 Château Les Cruzelles is an ancient estate, viticulture having been established in Lalande-de-Pomerol for just as long as it has been in Pomerol, just to the south. Even the very oldest editions of the Bordeaux bible, Cocks et Féret, make reference to the property. In the 1868 edition the region is noted as a source of “petits Pomerols”, and about two dozen estates and vignerons each turning out at least 5 tonneaux (equivalent to 20 modern-day barriques) per annum are listed, the author also noting that there at least another ten small-timers producing between 2 and 5 tonneaux (8-20 barriques) each year. The top seven estates are listed under the grand title of Crus bourgeois et 1er artisans, and halfway down the list is Au Cluzelle. The proprietor at the time was a Monsieur Gouteyron, and he is producing between 12 and 15 tonneaux each year. I wonder if he was of the same Gouteyron family that also owned, in the early 20th century, Château Tertre Daugay, today rechristened Château Quintus?