The primeurs always has me hankering for something other than Bordeaux. While I can usually scratch the itch with something from the Loire Valley, maybe Muscadet or Sancerre, or indeed anything between the two, this weekend I needed something different. A little digging in the cellar uncovered this Spanish joya, bought a few years ago which I was exploring anew (vicariously, sadly) the world of sherry, and subsequently forgotten about. Until this weekend, that is. Perfecta!

This very old oloroso comes from Bodegas Hidalgo, best known for their Manzanilla La Gitana, which accounts for a remarkable 70% of their production (an old-school British entertainer once said, when asked for career advice, “never quit the hit”; Bodegas Hidalgo were presumably a fan). An old family business, it was founded in 1792 by José Pantaleón Hidalgo, who came south to Jerez from Santander, on Spain’s north coast. Six generations later the business remains in the hands of his descendents, one of the few family-owned bodegas remaining. Their grapes are sourced from an expanse of 170 hectares which, unusually in the region, they own in entirety. 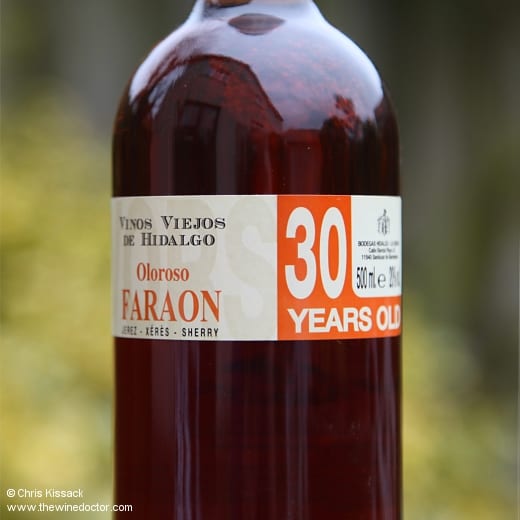 After La Gitana the other 30% of the Bodegas Hidalgo premium range includes a number of fine sherries aged between six and twenty years, including Napoleon and Faraon. It is then another step up to the VOS (vinum optimum signatum, unofficially very old sherry) and VORS (vinum optimum rare signatum, or very rare old sherry). To qualify for these labels the wines not only have to meet the age criteria according to the records of the bodega (which, given that many such wines are aged in soleras, can involve some complicated maths) but they must also undergo laboratory testing, the bodega must meet the stock requirements, and they have to pass the judgement of a regional tasting committee.

The Hidalgo Oloroso Faraon 30 Years Old VORS ticked all these boxes. Made entirely from Palomino, grown on the bodega’s albariza soils, all farmed organically, the wines were aged in solera for an average of thirty years before bottling. Then it spent a year or two languishing in may cellar – the ignominy! – before I pulled the cork. In the glass it displays a wonderfully warm, walnut hue, surrounded by a broad green rim; I have read that this green rim is a feature which marks out Madeira, but I have on occasion seen it in older sherries as well. It has a great nose, albeit an oxidative one, with all the rich expression of an oloroso, crunchy toasted walnut and dried fruits, complicated by the scents of smoke, green tea, green olive and pepper too. There continues to be great energy on the palate, a very fresh and peppery style, with lots of vinous substance set in what is a voluminous midpalate texture. There are some impressive residual notes of oxidation, with toasted nuts and grilled citrus fruits, but it is supported by a powerful acid surge which gives it a great sense of freshness. All in all a very dry style, despite the evident oxidative richness, and fabulous length, complex and polished. This is an excellent old oloroso. 95/100 (6/7/20)