My tasting schedule over the past few days has been dominated by samples of the 2020 vintage in Bordeaux, and I have discovered some delicious wines among their number. The whites often show particularly well at this stage; while the fledgling status of the red wines is often clear to see, the whites often feel more complete; more like a wine, and less like a barrel sample. I suppose this should come as no surprise; for some of them, the point at which they will be bottled and deemed ready for release is only a month or two away.

I was tempted to bring one of these wines out as my Weekend Wine but I didn’t think it was fair or perhaps even useful to propel such a young barrel sample into the spotlight in this manner, no matter how ready it seemed. So instead I have stepped back one vintage, to this white wine from Château Fourcas Hosten in Listrac-Médoc. While the release of a white wine from this estate might have the power to surprise, there is in truth a long history of producing white wines in this corner of Bordeaux; if that’s news to you, I provide some detail on this in my report on another Weekend Wine, the 2015 Château Fourcas Dupré, which I wrote about back in 2016. 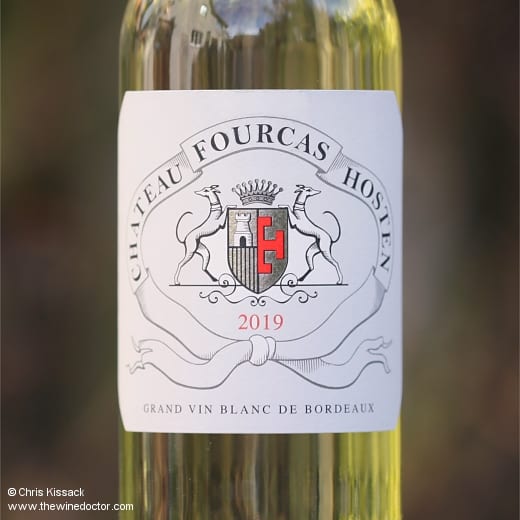 My recent encounter with this wine came courtesy of a Naturally Bordeaux webinar, in which members of the teams from Château Fourcas Hosten, Château Jean Faure in St Emilion and Château de La Dauphine in Fronsac presented details of the environmental work they are undertaking in the vineyards. This was in conjunction with David Pernet of Sovivins, a consultancy which works with châteaux looking to understand and improve their soil quality. It is clear that all three are making great strides in the vineyard; Château Fourcas Hosten has been improving biodiversity with the planting of hedges, and was certified organic for their white in 2020, and their red will be the same in 2021. Château Jean Faure, meanwhile, has been certified organic since 2017, and the wines are improving under the direction of Olivier Decelle, while recent releases from Château de La Dauphine, now certified biodynamic, are among the best in their appellation.

Château Fourcas Hosten has been in the hands of the Momméja family since their acquisition of it in 2006. An early move by them was to engage the aforementioned David Pernet to conduct a soil survey, to understand which parcels were best suited to their soils, but also to identify where to plant some white varieties. David excavated 48 test pits across the estate and the results facilitated an extensive restructuring of the vineyard. The first whites were subsequently planted on clay limestone soils (not as rare in Listrac-Médoc as they might be in other left bank appellations) in 2012, and the estate now has 2.2 hectares established. While certified organic, much of the estate is run on biodynamic lines, with a plan to certify the entire property in the next year or two.

The 2019 Blanc de Château Fourcas Hosten is a blend of 72% Sauvignon Blanc, 15% Sauvignon Gris and 13% Semillon, picked at a very restrained 28.6 hl/ha and refrigerated from the moment of picking in the vineyard. It is fermented in stainless steel, and aged in a mix of oak barrels and amphora, with regular bâtonnage. It was bottled in June 2020. In the glass it has a limpid, pale, straw-tinged hue (the photograph above makes it look rather more deeply coloured than is true) with a tinge of green. It has an impressively perfumed style on the nose, with white peach, orange zest, crushed white chalk and white freesia, displaying a light-footed immediacy which Is rarely found on the Médoc. It feels supple and well composed on the palate, yet it has a chalky energy and zesty citrus vein as well, and it feels much more like a limestone cuvée (from the right bank, or even the Loire) than it does a gravelly Médoc. This energy builds on the wine’s aromatic confidence, combining it with a pithy core, a bright acidity and a powerful saline charge. The label declares 15% alcohol (I happen to know it comes in at 15.2%) but tasting blind I would never have guessed this. Nevertheless, this is one white I would enjoy in its youth rather than committing to the cellar. More noteworthy, I think, is the grip and chalky substance, and the charged, minerally finish; proof, I think, of the value of choosing carefully which vines are planted where. 91/100 (12/4/21)