In my last blog post I put forward some thoughts on whether or not tasting primeur samples at home, as opposed to travel to Bordeaux to do so, might have any advantages. I thought I might be clutching at straws, although there are certainly one or two ways in which this system works well. For me, at least.

It is noteworthy that so far I haven’t found anyone in Bordeaux who can identify an advantage from their point of view. I have participated in half a dozen videoconference tastings over the last few days and if I could melt down all the responses to my query about the current system of sending samples around the world the result would be “well, it’s better than nothing”. The most commonly expressed concern was the lack of human contact, the inability to taste and talk about the wine, and to see how people respond to it. With his technical hat on, however, Philippe Bascaules at Château Margaux was more specific. We tasted ‘together’ on Wednesday, the samples having been drawn and shipped on Monday, arriving in Scotland on Tuesday. “The problem is I can’t judge now whether I am happy with the quality of your sample”, he told me. “Usually we taste together the same sample, on the day it is drawn, but now we are tasting different samples. Even though I have a sample drawn on Monday, to match yours as closely as possible, there is no way of knowing if they are the same”.

It’s a fair point. But are there any disadvantages from my point of view, to balance the advantages described in my last post? Yes, there are.

First up, sample quality. Many samples have arrived within one or two days of shipping, and they have all been fine. Indeed, when in Bordeaux, outside the châteaux visits many samples I find poured at tastings (with regional bodies, or consultants) have been in the bottle for longer than this (sample bottles almost always have date and time it was drawn on the label). Some samples have taken four or five days to arrive. Most of these have been fine as well. I think one batch of wines were a little muted aromatically compared to what I would expect, and this is perhaps the problem. 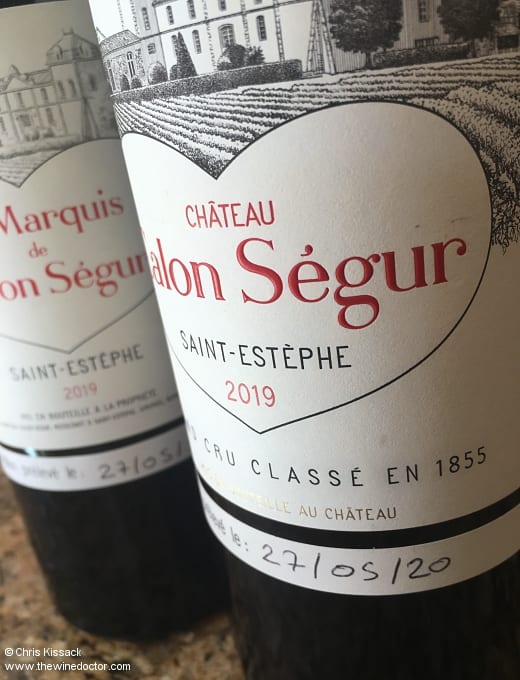 I think anybody tasting Bordeaux primeur samples at home has to accept that some samples may start to tire when in transit. This is a difficult criticism to make with regard to any specific wine as it won’t display an overt fault – i.e. oxidation – which would allow a taster to reject it. And if a sample tires, losing some percentage of its aromatic expression when on the road, it could still taste good when it arrives. The problem is it might have tasted even better two days previously. I think it is vital that anyone tasting Bordeaux at home remains open-minded to this concern, and that we maintain a sense of transparency with consumers about the context in which these wines were assessed, and also that we maintain some sense of humility. Some critics have refused point-blank to taste samples at home, and while I think it is wrong not to even try this system out I still respect their decision. Having tried it, the system works, but I readily acknowedge it is not perfect, and we need to be open and accepting of this.

A second very valid concern is the environmental impact. As my local recycling and refuse centre is closed during the Covid-19 pandemic, I am storing the packaging used to ship these wines at the side of my garage (pictured below). The cardboard can eventually be recycled, but this is a huge amount of expanded polystyrene which will go into landfill (my local council does not recycle this material), and looking at anticipated deliveries next week (one 103-bottle delivery and one 44-bottle delivery, plus other small deliveries) I expect the volume piled up here to at least double (and perhaps treble). The bottles can be recycled of course, but the carbon dioxide emissions associated with shipping full bottles of wine also have to be taken into account. If the Bordelais were ever to choose to do this again (which I don’t expect) it would be essential to identify how to ship samples in a way that had less environmental impact. 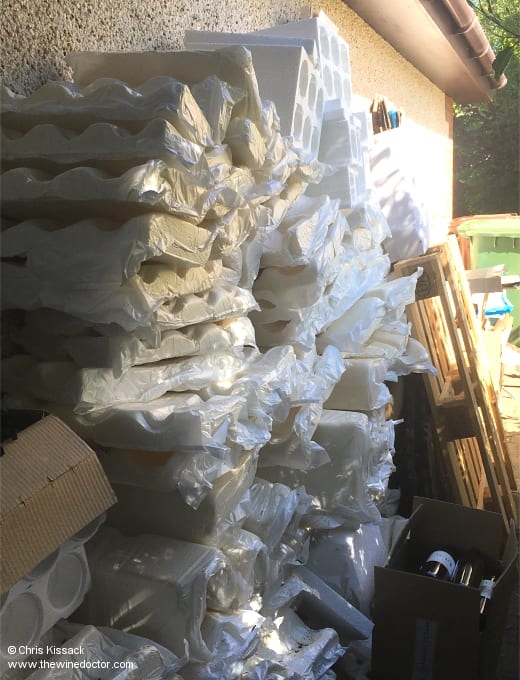 Thirdly, one curious feature of the primeurs at a distance is how it has allowed some châteaux to select the critics who taste their wines. A number of châteaux will not send samples at all, to anybody, and I respect that decision. These include Château Palmer, Château Montrose, Château Rauzan-Ségla, Château Ausone and a handful of others. The majority, on the other hand, have been happy to send samples, some making specific adjustments to sulphite levels before shipping to try and ensure they arrive in the best possible condition. A very small number of châteaux, however, have opted to send samples to some journalists, but not to others. Bearing in mind the huge production volumes of some Bordeaux châteaux and the prices charged, this seems a particularly surprising path for highly regarded grand cru classé châteaux to take.

And lastly, there is the issue of timing. Château Pontet-Canet released in the last few days, and no doubt others will soon follow. And yet I still have samples coming to Scotland next week, and the week after, and maybe more after that. Given that the idea of reporting on these wines is to inform consumers, the system falls down if critical opinion is sidelined by the stuttering arrival of samples. To my mind it would be better to get to Bordeaux, taste everything, and then get the report written.

So yes, there are problems with doing the primeurs at a distance. Do these disadvantages outweigh the advantages? To my mind, I think they do, and while I know the whole concept of primeurs is open to question (on multiple levels) the system of tasting ‘at a distance’ adds another unwanted variable into the mix. In short, I would rather do all this work in Bordeaux. But the simple truth is that it’s not possible this year, so during the next few weeks I will hopefully finish tasting Bordeaux 2019, figure out how I am going to write and publish a report which will inevitably be a not-quite-complete overview of the vintage, and hopefully we can all look forward to tasting Bordeaux 2020 next year in a more appropriate setting.