Bordeaux 2019, at a Distance: Advantages?

Bordeaux 2019, at a Distance: Advantages?

Eager observers of my posts and schedule will notice that I originally intended to post these thoughts yesterday, but the truth is a full day of tasting, rounded off by a Zoom videoconference with Philippe Bascaules at Château Margaux, left me with no time to see it through. So here I am, just 24 hours behind schedule.

I have quite a few more wines to taste this afternoon, some top names from both left and right banks, but before I put my one surviving corkscrew to work I want to ask the question; are there any advantages to isolating at home and having barrel samples from the latest vintage sent to me, rather than travelling to Bordeaux? It might seem like a strange question, but having overcome my initial reluctance to accept the delivery of primeur samples, which are widely regarded as fragile (and thus not suited to travel or time away from the controlled environment of the cellar) at this time in their lives, and the bottles started arriving, it soon became apparent that there are at least some advantages.

The first thing I realised is that I taste much more slowly at home. In Bordeaux I work to a tight schedule; an hour at Hubert de Boüard’s tasting at Château Angélus, then on for forty minutes with Stephan von Neipperg at Château Canon la Gaffelière, before sprinting up to Château Troplong-Mondot for a quick twenty-minute appointment with Aymeric de Gironde, and so on. You have to be focused, and each wine has only a few minutes to make an impression. At home, however, I can take my time; this can be a curse as much as a blessing, as I sometimes find myself taking hours over a flight of wines I should be able to dispatch in thirty minutes. 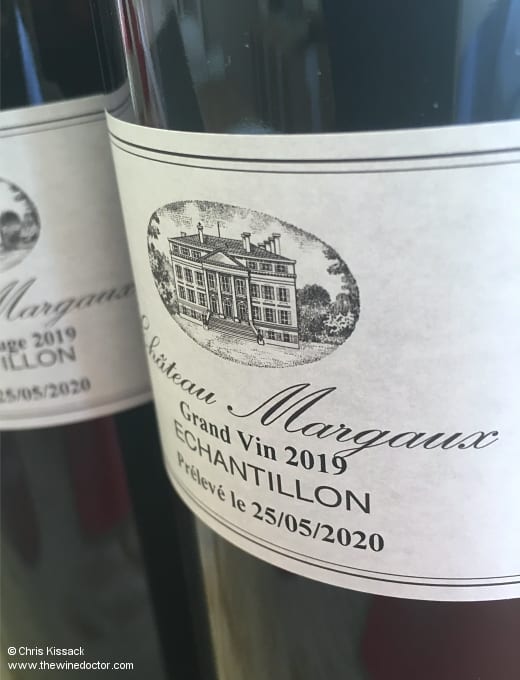 But no matter; it is good for the wines, giving them time to breathe and open up, to show their best. Some wines I taste multiple times; for example, if signing in for a videoconference with the winemaker, I will open the bottles at least an hour beforehand and take a quick taste, to make sure the samples are acceptable, and make a few cursory notes. Then I taste again during the ‘meeting’, and talk around the wines, asking questions. Then once I have signed off I taste again in more detail, writing my final note and score. Wines which might receive only a cursory glance in Bordeaux suddenly have much more of my time and attention. And later on I can come back to them, tasting wines side-by-side with other contemporaries, something that is impossible to do when you can only taste each wine at its respective château, thereby facilitating a new way of looking at the vintage. This latter process has been particularly enlightening.

Correspondingly, I have found during the past few weeks I have tasted a number of wines that I simply would not get round to tasting even during the course of my primeurs visit, which these days is the best part of two weeks. At a consultant tasting there might be eighty or more wines on show, but with only an hour to spare before my next appointment I would only have time to taste my top twelve choices. Here in Scotland, however, I can check out every wine at leisure, several times during the course of a day if I feel like it. Over the course of the last two weeks I have tasted wines I did not even really know existed. That can only be good for those wines, as well as my own knowledge of the less commonly encountered corners of the Bordeaux region. 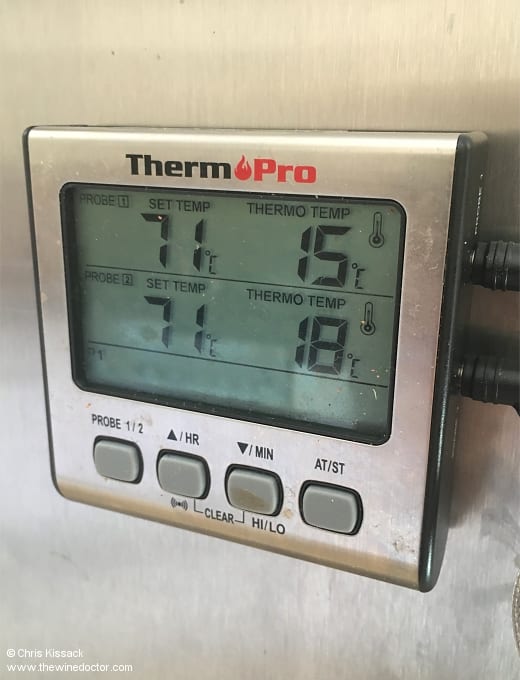 Another advantage of looking after the bottles at home, prior to pulling the corks and tasting, is that I can ensure the samples are all presented in optimum condition. While many (perhaps all?) among the Bordelais pride themselves on showing their wines to their best advantage, it is also true that some continue to get it wrong. There are samples where the corks are pulled after my arrival at the château, giving no time for the wine to breathe before tasting. This is more important with young bottled wines than it is with barrel samples, but it still makes a difference. And some wines, especially at larger tastings, are held at the wrong temperature, with reds too warm, and whites too cold, the latter sometimes left languishing in huge ice baths – by the time I get some wines into my glass they can be halfway to becoming a Sauvignon sorbet. The two zones in my wine cabinet are too cool (plus it is full!) so bottles are stored cool and then adjusted to the correct temperature in the fridge, aiming for 15ºC to 17ºC. I monitor the temperatures using a probe in the wine and digital thermometer (pictured above), which very quickly reminded me how a half bottle (probe 1, at 15ºC) chills much more quickly than a full bottle (probe 2, at 18ºC). You might think this is all a bit over-the-top, but if the Bordelais (well, most of the Bordelais) have sufficient faith and interest in me to send me samples, the least I can do is treat them with an appropriately high level of care.

Another important consideration is environmental impact; one trip to Bordeaux for the primeurs involves at least two flights, and in more recent years four flights, as I have reached Bordeaux via a connection through one of the London airports. Then I hire a car, and gun the engine up and down the rural roads of Bordeaux for close to two weeks. And of course I am not alone; there are hundreds of other journalists, writers, critics, traders, buyers and malingerers doing the same thing. Wine journalists as a group tend to travel a lot, often flying to get to our far-flung viticultural destinations, and I am acutely and increasingly aware of the environmental impact this has. Could sending out samples reduce the environmental impact of wine journalism? It sounds like a tempting idea, although I am not at all sure. It is something I will return to in my next blog post, when I look at the disadvantages of doing the primeurs ‘at a distance’. It could well turn out to be a much longer post.