I think many readers of Winedoctor will already be familiar with the wines of Sancerre, and of François Cotat. I hope you will endure, however, a two- or three-sentence recap on the Cotat domaines before I write a little more on this wine. I know I get confused between the various Cotats in Sancerre, so I am sure that there are others out there (this is what I’m telling myself, anyway) who also fail to fully commit to memory which domaine is which, and which Cotat is which.

The Cotat story started with the Cotat Frères, Francis and Paul. Work at this family domaine revolved around three plots of vines in three of Sancerre’s most famous terroirs, Les Monts Damnés, Le Cul de Beaujeu and La Grande Côte. The wines could be labelled as being from Francis Cotat or Paul Cotat, although otherwise the labels were remarkably similar, and it didn’t matter anyway as the wines in the bottle were exactly the same. Thus, although each brother turned out three cuvées from the three terroirs in question, there were not six different wines. Why bother with more cuvées than you really have? It calls to mind the 1991 Cornas from I tasted from Noël Verset many years ago that was sold under the name of Yvonne Verset, Noël’s wife. The reason some vignerons used to follow this path was because, I believe, there were once tax advantages in selling a wine under a different label rather than simply enlarging your own production or portfolio. 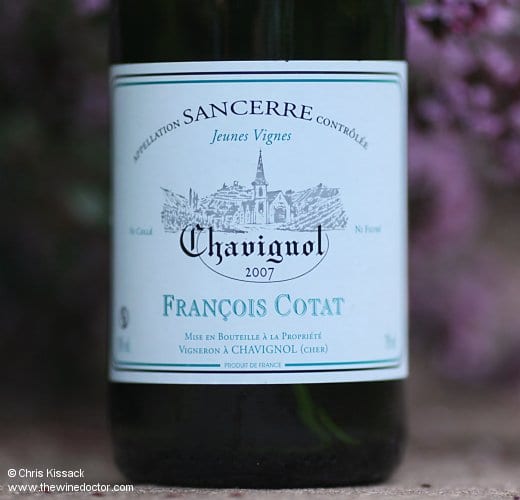 More recently the next generation, Pascal (son of Francis) and François (son of Paul) have taken the reins, although the situation remains no less complex. The family continue to share out the three main terroirs, although today the wines are certainly different, the tax loophole that led to the bottling of the one wine under two labels having long been closed by French legislation. So today it is more important to distinguish between the wines of François Cotat, who took over the family domaine, eventually replacing the aged cellars with new facilities, and Pascal Cotat, who moved out to set up on his own when the domaine was handed down to this generation.

Sorry, I know that was more than two or three sentences. I got carried away.

Thus today François continues on with his share of the family domaine, a shade more than 1 hectare on Les Monts Damnés, 0.9 hectares on Les Culs de Beaujeu and 0.9 hectares on La Grande Côte. I have featured some of his wines before in my Weekend Wine posts, notably the 2004 Les Monts Damnés and 2004 Les Culs de Beaujeu. Quite why I seem to have a predilection for the 2004 vintage I’m not sure; I know I have other vintages tucked away. I guess I should feature La Grande Côte sometime soon as well, just to ‘complete the set’, so to speak. In the meantime though I thought I should cast the spotlight on this cuvée, which comes from a fourth terroir, more recently acquired by François than the three he inherited from his father and uncle. The jeunes vignes in question are planted on caillottes, and the 2007 vintage was the last in which they were ‘declassified’ as young vines, the cuvée commercialised under the name of the terroir from the 2008 vintage onwards.

The François Cotat Sancerre Jeunes Vignes from the 2007 vintage is, like the other Cotat wines, neither fined nor filtered. In the glass this wine has a very pale, almost watery lemon-gold hue. There is a vibrant nose, with evident citrus fruit tones with a slightly desiccated edge, but these notes are subtle, and aromatically the main characteristics of the wine are not fruit based. It starts off with a quiet floral suggestion, like a spring meadow, but soon rounds out into a firm, nettly, chalky minerality. Although this doesn’t have the polish of the other Cotat cuvées, it certainly has the character and the conviction. The palate is as vibrant, full bodied and as confident as the nose suggests. The structure of the wine is forthright, the acidity having the bite and substance of pithy grapefruit, but without overt grapefruit flavour. There is a lot of vigorous and vibrant substance and life here, focusing down into a long, cutting, acid-tinged finish. I’m looking forward to trying a more recent vintage from these vines, now that they have a little more age on them. 16.5/20 (20/8/12)