With my exploration of the Médoc appellation I am drawing this journey along the length of the left bank of the Gironde to an end. And it is like stepping into another world, from the point of view of a Bordeaux traditionalist, at least.

The last break in the vineyards we encountered was between the vineyards of St Estèphe and those of St-Seurin-de-Cadourne, the most northern outpost of the Haut-Médoc. This break was, to the untrained eye, rather subtle; it is a mere dip in the landscape, a few hundred metres of low-lying marsh and reed-bed, the central Estey d’Un draining the waters into the Gironde. Between St-Seurin-de-Cadourne and the vineyards of the Médoc, however, there are several kilometres of low-lying marsh to be traversed before the land rises again, up to St-Yzans-de-Médoc. Other than Château Loudenne, sitting right on the water’s edge, this is a plain devoid of viticulture. Indeed it is a landscape that lacks any notable feature at all, the only point of interest being the rather delicate ruins of the Abbaye de St-Pierre-de-l’Isle near Ordonnac, to the west. All that remains of this 11th-century edifice, which fell into ruin at least three hundred years ago, is a wall and a few scattered stones.

The existence of these ruins, which sit on a small rise in the landscape, is more than a passing distraction though. They illustrate something important about the topography of the Médoc, not just how the land lies today, and how it can best be used, but how dramatically it has changed over the past few centuries. More on this significant but often overlooked aspect of the Médoc below. 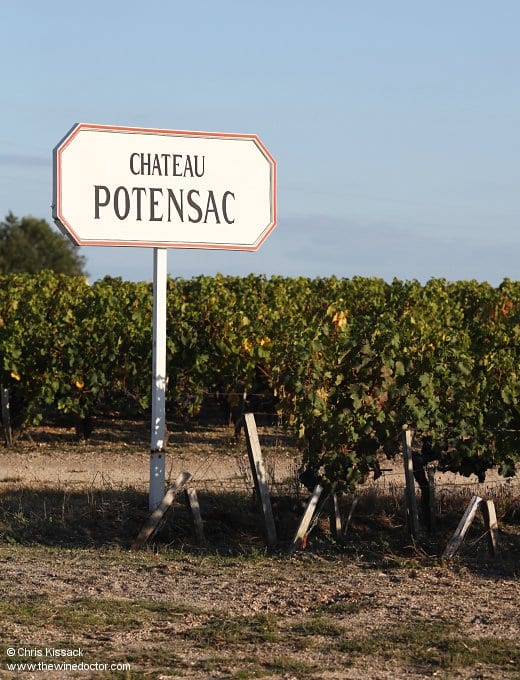 Continue far enough north through the vineyards, interspersed with areas of lower-lying agricultural land and marsh, and eventually the vines will disappear altogether, to be replaced completely by thorny scrub and sand rather than soil. Here and there you will find pine trees but move to the west, closer to the Atlantic coast, and you will soon find yourself in a densely wooded zone, criss-crossed by narrow roads. These trees were planted on the orders of Napoleon in order to stabilise the sandy soils, prevent coastal erosion and enhance the usefulness of the land; this coastal woodland extends far to the south, but it is only here in the northern Médoc, as the peninsula of land narrows, that the trees and the vineyards approach one another. Take a drive along these deserted woodland roads and it easy to imagine you are the only soul here, lost in an untamed wilderness, but keep heading north and you will soon rediscover civilisation. Right at the tip of the peninsula is Le Verdon-sur-Mer, a town of reasonable size, its population bolstered by the inhabitants of the many campsites and holiday parks dotted around its periphery. And there is a small port here too, from where you can take a ferry across to Royan on the far side of the estuary, with numerous sailings each day.

It is the vineyards that are of interest to us though, so let’s explore their character and extent.