This is the second wine from Henriques & Henriques to come my way in the space of just a few weeks, following the 15 Years Old Boal also from Henriques & Henriques featured on these pages back in January. Subscribers who are on my mailing list will of course not be surprised to see such a wine pop up; they all know I spent the last week in Madeira, celebrating my 50th birthday. I can’t imagine a better place on earth to mark such an occasion; indeed I am tempted to suggest that a similar plan for my 51st should be established without delay.

I won’t pretend that I drank a lot of Madeira last week, other than a few shots of the entry-level three- and five-year old wines that some restaurants foist on you as you ponder the bill. I did, however, reacquaint myself with some of the table wines of Portugal which dominated wine lists on the island. I was reminded how complex and multifaceted the modern Portuguese wine scene is, and what quality it offers; I was particularly impressed by the 2017 Geronimo from Herdade do Portocarro, a world-class white without a doubt, but also drank some great efforts from Dirk Niepoort, Herdade do Esporão, Quinta de Soalheiro and Vinhos Borges. 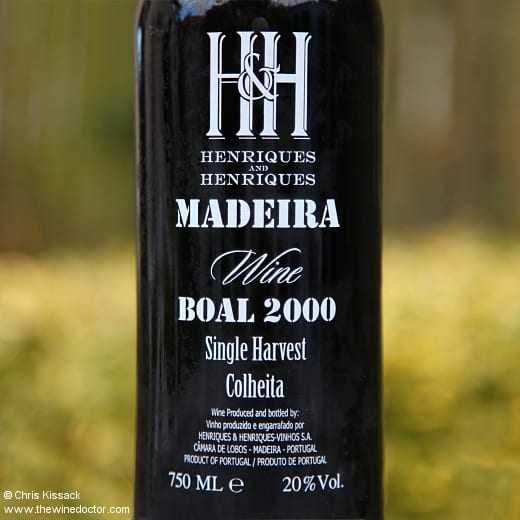 Having resolved to read up on Portugal and her table wines, let’s get back to Madeira, which is for me somewhat more familiar ground. Henriques & Henriques, one of only a handful of producers still in existence, and in possession of the largest area of vineyards on the island, perhaps needs no introduction, and I should imagine most readers also know Boal (sometimes written Bual), one Madeira’s six grapes, usually associated with a sweeter wine. What is perhaps less familiar here is the style; while the vast majority of Madeira made today is blended to an average age, typically three, five, ten or fifteen years, this is instead a single-harvest colheita wine.

The terms colheita and garrafeira both came into use for single-vintage Madeira in 1982, the former describing a wine aged fewer than twenty years in wood, the latter for wines which have been in barrel for longer than this time period. Prior to 1982 single-vintage wines suffered no such rules, although I would think most were of a garrafeira grade. The 2000 Boal Colheita from Henriques & Henriques was aged using the traditional canteiro method, the barrels resting for fifteen years in the warmth of the company’s lodge in Câmara de Lobos, before it was bottled in 2016. In the glass it displays a golden walnut brown, with a very faint green tinge at the rim. The nose is complex and enticing, combining the sweetness offered by many Madeiras, but with fresher elements too, which are perhaps rarer. There are notes of walnut, dried fig and caramel, along with some oxidative baked earth and old teak notes, but there is also some lift, suggested by fresher scents of tobacco leaf, mint and a salty citrus tang. Indeed, while the palate offers a medium body and a broad sweetness it feels elegantly understated, and it is countered nicely by the acidity. This gives it real energy and form here, leading into a fabulously long, fresh yet warming finish. An excellent example of the colheita style. 94/100 (11/3/20)