When on the island of Madeira more than a few years ago I made what remains my least successful visit ever, when I called in at the cellars of Henriques & Henriques. It was one of three producers I planned to visit during my stay, the others being Vinhos Barbeito and the Madeira Wine Company, the latter perhaps better known as Blandy’s, although in truth this is just one of several labels the firm utilises. I made appointments at each, first calling in at The Old Blandy’s Wine Lodge in the centre of Funchal, an atmospheric building with Medieval origins, where I tasted a small range of the company’s wines, including some older vintages (of course). A few days later my trip to Barbeito took me out of the capital to the hilltops above Câmara de Lobos, where I found appropriately new facilities for one of the island’s youngest firms. This was a great visit, culminating in a tasting of some seriously old wines, as far back as the 1834 vintage. The vivacity possessed by these wines, the most venerable well over 150 years old, was an experience I shall never forget.

I shall also never forget my visit to Henriques & Henriques, although sadly for different reasons. I arrived bang on time at the impressive cellars in Câmara de Lobos, its wall of glass exposing the stacked barrels within to the sun’s rays, the warm conditions essential for the aging of the wines in the canteiro process. I parked up on the typically steep Madeiran hill outside and entered the cellars, only to find them deserted save for a lone worker who spoke no English (I had a similar level of Portuguese) and who clearly had no interest in establishing the identity of my absent host, or in trying to track him down. A telephone call yield no response, and eventually I had to admit defeat; it was the only ‘aborted’ visit I have ever experienced, and subsequent emails to establish what had gone wrong elicited no response. It was the vinous equivalent of being ghosted. Well, sort of. 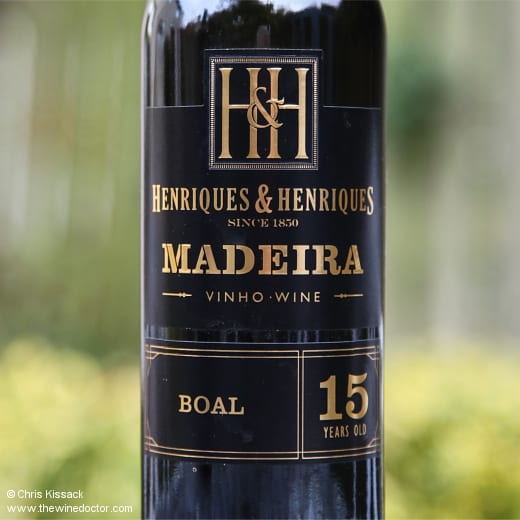 Despite that experience I have not shied away from drinking the wines of Henriques & Henriques during the years that have since elapsed. In the UK those wines which are readily available tend to be on the younger side, blended rather than single-vintage colheita or garrafeira (see, I do know some Portuguese words) wines, but this week’s 15-year old wine has a touch more maturity to it than many which are widely offered, most of which are five- or ten-years old. Sadly, I have found Madeira from the 1834 vintage is not commonly offered for sale at my local store or corner shop; the exact opposite is true on the island itself, where every corner store and gift shop in every town and village seems to have an array of old vintages dating back to the early 20th century for sale.

As well as having a little age this also offers an encounter with Boal (also known as Bual, or Malvasia Fina) which is far from the most abundant variety on the island, with a mere 16-or-so hectares planted. It tends to be found in very small parcels on the south coast, at relatively low altitudes, and it produces small and tightly packed bunches of sweet grapes which lend themselves to sweet wine, as is the case with this Henriques & Henriques  Madeira 15-Year Old Boal. In the glass it displays a golden caramelised hue, with a gentle green tinge around the rim, said to be typical for old Madeira although when tasting blind I have also seen it in some other fortified styles. The nose is explosive and carries undeniable suggestions of the sweetness of the palate, as along with the baked earth and toasted hazelnut character that betrays the oxidised base upon which the wine is built there are also flavours of dried fruits, especially dried figs and raisins, their sweetness concentrated by age and desiccation. Appropriately plush on the palate, with those same caramelised fruits, along with smoky toasted hazelnuts, it is supported here by a firm acid backbone which lends the wine an upright and firm style, undeniably acid driven, the finish long and energetic as a result. This is a very good example of the style, with some emerging complexities, and it has plenty of harmony too. This wine serves as a very solid stepping stone to the great aged wines of the island; the best way to taste such delights, as I have already hinted, is of course to visit the island for yourself, something I unreservedly recommend. Your could tour the corners shops looking for bargain bottled, but better would be to make an appointment to taste. Provided your host actually appears, you should be in for a vinous treat. 92/100 (27/1/20)