Sherry can pop up at the least expected moment, a little like an unwanted tax bill or a global pandemic. Although, to be fair, sherry is usually a lot more enjoyable. After a long absence, my recent encounter with the 30-Year-Old VORS Oloroso Faraon from Bodegas Hidalgo was a welcome return to these pages for Sherry, a style of wine I have grown to adore as the years have gone by. Now just a few weeks later we are back in Jerez once more, this time with the latest release of the Tio Pepe Fino En Rama from Gonzalez Byass.

When I checked to see how long it was since I last wrote a few words on this wine, first released back in 2010, I was expecting it to be just a few years ago, so I was fairly surprised to discover that it was the 2011 release. During the course of the intervening nine years the Tio Pepe Fino En Rama has seen a regular annual release, and I think I have tasted and drunk every one, so I have clearly been somewhat lax in my approach to reporting on them. I can at least put that right with this year’s effort though. 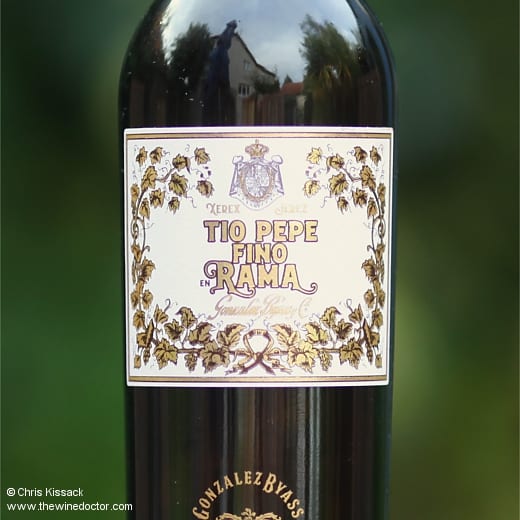 First, a few words on the Fino En Rama phenomenon, and why it is so important. A vital feature of the Fino and Manzanilla styles is the protective layer of flor which sits atop the wines in barrel; without it these wines would eventually oxidise, which would take them down a different path, probably towards an Oloroso style. And flor also imparts a lot of character to the wine, converting residual sugars and even some of the alcohol into new compounds, imparting a distinctive flor character to the wine which might be described as salty, yeasty or nutty. The wines can be intense and vibrant, and yet in my experience a bottle of Fino plucked from the shelves of your local off-licence or supermarket can often be a disappointment.

There are perhaps two reasons for this. The first is age; take these wines away from the flor-rich environment in the barrel, into bottle, and they begin to lose some of their dramatic character. The second is filtration; in the search for consistency of product, many wines coming out of Jerez have historically been subject to heavy filtration, creating a stable and homogenous product (and dare I say it, a less challenging one?) but in the process stripping it of much of its character. The En Rama style should circumvent both these problems, firstly by subjecting the wines to only a very light filtration, and secondly by shipping them to market as soon as possible. En rama literally translates as on the branch or perhaps on the vine, and the message is clear; this is a wine as close to its original state as it can be. Some even choose to translate its meaning as raw, a translation I rather enjoy. That they are different to your average Fino is plain to see; they have more colour, often a pale golden yellow rather than the water-clear hue of some commercial Finos, they are more aromatic, and they carry a richer flavour profile.

And so it is with the 2020 release of the Gonzalez Byass Tio Pepe En Rama, which was delivered to my door only a week or two ago, and which was still in barrel in Jerez just a few weeks before that (to be precise, the bottling date stamped on the back label was April 24th this year). In the glass it does indeed display a bright lemon-gold hue, and the aromatic profile is decisively expressed and full of en rama typicity, with energetic notes of green olive, salted mint and green apple, all with a twist of acetaldehyde flor character. It continues in a very smart style on the palate, which feels cool and well-framed, with minty green olive and green apple at the start, freshened with notes of iodine and saline sea-spray. Then in the middle the style yields more convincingly to the flor, which is vigorous here, with a yeasty intent. It remains fresh throughout, even though it has only rather modest acidity and feels a touch velvety as a result. Delightfully bitter and gripped in the finish, I think this is a must-taste experience for Fino fans. 92/100