I’ve always been a keen supporter of the underdog. Perhaps this is one reason wh I enjoy casting the spotlight onto domaines in Bordeaux that challenge the superiority of the first growths. In all truth, I suppose you can’t really consider high-flying second and third growth châteaux in Bordeaux to be ‘underdogs’, as these estates are all operating close to the top of their game. But this is the closest we will get to witnessing the triumph of the underdog in Bordeaux I think; there are plenty of interesting small cru bourgeois and cru artisan domaines turning out delicious, worthwhile and notable wines, but in my experience none has yet pulled a wine to beat Margaux, Latour or the like out of the hat. Not in this day and age, when these first growth estates are on top form, anyway. Nevertheless this tendency naturally pushes me, especially in the context of the tsunami of 2014 Bordeaux that is currently washing over Winedoctor, to look at the Loire. And, of course, the red wines of the Loire, Cabernet-based red wines, of course. Fresh back from Bordeaux the last thing I want is another turbo-charged, micro-vinified bottle of Château Magrez-Fombrauge or Château Péby-Faugères; let’s have something from one of the underdogs.

Ampelidae is a good example of the underdog’s struggle, not only when placed against the backdrop of the great estates of Bordeaux, but also within the Loire Valley itself. The domaine was born in 1995, the brainchild of Frédéric Brochet, in the Haut Poitou region, a long way south of the Touraine vineyards. That this wine comes from the Haut Poitou assures underdog status; this is a region that only the most obsessive Loire geek will be familiar with. If you’ve been to the region in a wine frame of mind then either you are a wine buyer with a keen nose for a Loire Valley bargain (and the many Sauvignon Blancs and Cabernet Francs of the Touraine appellations perhaps just aren’t quite inexpensive enough for you) or you are a very dedicated wine journalist with a specific interest in the Loire Valley and a penchant for being comprehensive. 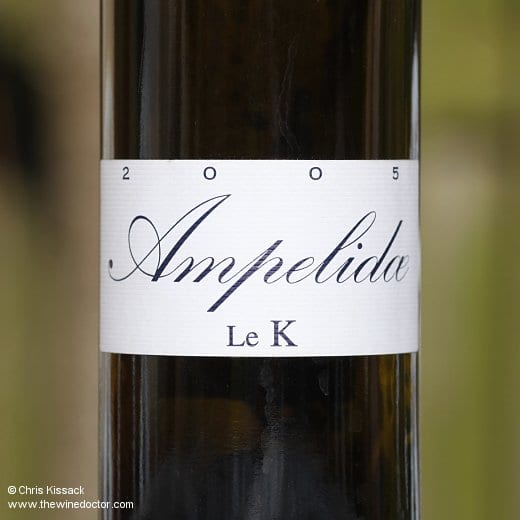 Frédéric Brochet grew up in the region, surrounded by viticulture, and he made his first wines as a teenager from the family vines. I suppose he could have gone on doing just that, making small-volume cuvées for friends and family, just as so many in the region have done, generation after generation. But inside Frédéric’s mind a greater ambition grew; he left to study in Montpellier, before going on to undertake a research project into methoxypyrazines in Australia. The impressive winemaking facilities he discovered there were a world away from the norm back in the Haut Poitou, and they were an inspiration to Frédéric. He returned with a new determination to create a domaine on the same scale, and perhaps I suppose with the same level as success. He kicked off with a few hectares of vines handed down from his grandparents, but was soon able to expand. Suddenly, being in Haut Poitou was a major advantage, as there were plenty of interesting plots of old vines available here, and vineyard land was cheap. What was born the beginnings of Ampelidae, based in the village of Marigny-Brizay.

The top range of wines includes Le K, which in 2005 was a blend of 50% each Cabernet Franc and Cabernet Sauvignon, although the blend can vary with the vintage, and it may sometimes include a little Merlot. It comes from vines planted on the typical chalk of the region, which dates to the Upper Turonian, in many cases overlaid with rendzina, a soil of weathered rock. At the time of the 2005 vintage the vines were all in conversion to organic viticulture. The 2005 Vin de Pays de la Vienne Le K from Ampelidae has now, at ten years of age, a surprisingly dark, opaque core, with barely any sign of maturity at the rim, which has a raspberry-claret hue. The nose is really convincing with scents of sooty fruit, damson and black pepper laced with an appealing herbal edge, coming through as notes of rosemary and bay leaf rather than anything intensely green, with appears hand-in-hand with a crunchy cranberry note to the fruit. It has a generous texture from the start on the palate, with savoury but rather jagged dark fruit laid out on medium substance in the middle, all underpinned by a peppery acidity and some firm and grippy tannins which course right through into the finish. This is really quite enticing, albeit with a few unpolished edges. In truth, it is a really interesting and enjoyable wine. I wish I had a few more to see how this would progress with another five or ten years in the cellar. There is certainly plenty here to suggest that this underdog could evolve into something really interesting with time. 16/20 (13/4/15)