The approach to Château de la Rivière did not quite provide the sweeping vista I was expecting. After all, having seen pictures of the château, I knew it was grand, picturesque, flamboyant even. I also knew that it enjoyed a rather commanding hillside position, overlooking the vineyards below, and the Dordogne in the distance. I couldn’t have driven past it in error, as nowadays Château de la Rivière is impossible to overlook; for years the château had hidden beneath a layer of dirt and a cloak of greenery, so much so that the locals had become blind to its existence, the buildings blending in seamlessly with the surrounding trees. But a new owner has cleared away the ivy, and restored the stonework beneath to its original creamy-white. Rumour has it that the locals, seeing this reinvigorated building gleaming brilliantly in the Bordeaux sunshine, pointed and asked each other who had built the ‘new’ château on the hill. No, I had certainly not driven past any such edifice. And yet here I was at a rather anonymous gatepost, labelled as the entrance to Château de la Rivière. It was something of a disappointment.

Happily there was no strange force at work here; I was at the right Château de la Rivière for a start. It was just that I had arrived at the back entrance. Unfortunately for me my GPS device does insist on directing me to the nearest road to the château I am searching for, as I once found to my cost when I endured 15 extra minutes of unnecessary driving just to be directed to an imposing fence at the back of Château La Mission Haut Brion. “You have arrived at your destination, on right,” I was informed by the device which spoke with all the confidence of a senior news reader, while I pondered whether I should turn around and attempt to locate the front entrance, or simply park up at the side of the dual carriageway, climb the fence and knock on the back door of the chapel. After that I did activate the ‘Approach all wine estates from direction affording the most striking view of château and vineyards’ setting, but on the evidence of my arrival at Château de la Rivière it didn’t seem to be working. 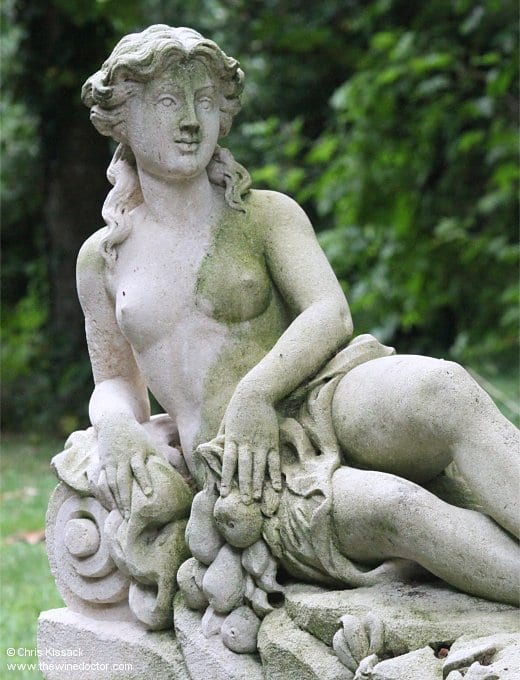 Having duly entered the grounds of Château de la Rivière by the back gate, I followed the single-lane driveway, overlooked by woodland on each side, passing classical sculptures on the way, and the château – or rather the back of the château – soon came into view. I parked up near Pomona (pictured above) and walked the short distance to the rather impressive back door, which is more of a grand archway than a door, to be honest. There to greet me was Hamish Wakes-Miller, who uses the château as a base for some of his Bella Wine Tours, proprietor at the time James Grégoire, and winemaker Xavier Buffo. The introductions over with, we made our way inside for a tour of the château and cellars.