I continue my trawl through the major appellations of the Northern Rhône, brought to life through opening a variety of bottles from my cellar, with Condrieu. It will be a singular inspection of the style, however, unlike preceding weeks where I have managed to unearth at least two examples of each appellation (and usually with a wider selection than that to choose from). I did pull a bottle of the Gilles Barge Condrieu 2000 until I remembered this had been featured as my Weekend Wine in July 2006. 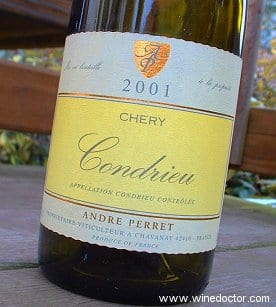 The appellation of Condrieu was created in 1940, but even at this stage wine held a place in the mindset of locals very similar to that which I have described for Cornas. It was but one part of the agricultural year; fruit and vegetables were just as important in providing a regular crop and a good income. Initially the wines were often demi-sec or sweet rather than fermented to full dryness, a style which facilitated a rapid sale within a few months of harvest. Indeed, the wines remained so for many decades, and it is only in the last twenty or so years that the style has really evolved into the lush yet predominantly dry character that we see today. Heavy oak will rear its head in some cuvées, and although many excellent wines are raised in oak this is not in my opinion a style that typifies Condrieu, and is not where one new to the wines should begin. The wines are classically floral in their youth, with notes of pine kernels, stone fruit such as apricots and also pears, and the lush mouthfeel is often accentuated by a low acidity, a consequence of the difficulty in balancing the sugars present in the ripening grapes with the physiological ripeness of the pips. They are said by many to age poorly; I wonder if these comments are made by those who haven’t really tried ageing Condrieu for themselves, or who have had a bad experience with one poor bottle. My experience of drinking the wines at seven or eight years of age would suggest this commonly touted belief is a myth. Admittedly these are hardly ancient wines, but it is certainly far beyond the guidance of many writers, who suggest that the wines are drunk up within two or three years of the vintage. As the wines age they lose the fleshy seduction of their youth, and become more taut and complex. It is a metamorphosis similar to that seen with Marsanne and Roussanne in white Hermitage, as those wines move from the fruit of youth to the nutty flavours and silky textures of old age. With Condrieu, the texture will change to a drier vinosity and the flavours will move towards acacia, honey and maybe dried fruits. Some of these characteristics will be clearly apparent before ten years – so we are perhaps looking at a much shorter ageing curve than for Hermitage – but it is noteworthy that many of the leading growers of the region are happy drinking their best wines at twice this age.

This week’s wine originates from south-facing slopes in Chery, a vineyard near Vérin, just to the west of the town of Condrieu itself. Perret owns 3 hectares of the 4.8 hectare site, which has granite subsoils, overlaid by loess. It is fermented two-thirds in cask, varying from new to four years old, and one-third in steel, and will see lees stirring through to spring, and bottling one year after harvest. The 2004 Condrieu Chéry from André Perret was monumental, a wine to excite even the most jaded of palates, the 2001 has also been delightful, although it did go through a rather dumb, awkward phase three years ago. But today, this vibrant yet pale golden wine, tinged with the slightest lemon-green, carries a nose bearing fascinating similarities to a younger Condrieu, although there are also advanced features which set it apart. Most familiar is the pine kernel element which can mark Condrieu, although here it has a broader, richer, more nutty character. Alongside this there is deeper complexity, notes of baked pears, honey and baklawa, a melange of honey and pistachio nuts, pastry or sweet and crispy confectionery. The palate is still slightly fat and benefits from a cool serving temperature to ameliorate the wine’s slight softness that comes from a typically low acidity. But it certainly has grip and structure, a bitter nut-tinged element carrying the secondary flavours through towards the finish. It has a really broad and flattering character here, showing a richness and smoothly polished texture, but never veering towards flabbiness or loss of focus – it always has that very direct, well defined grip behind it. A very appealing style which no doubt owes much to the skill of the winemaker and the quality of the raw materials. It opens out at the end, with a rich yet gently caressing character, and the finish goes on and on. This is really excellent. 18/20 (4/2/08)