Perhaps my most enduring memory of Sancerre concerns my discovery of Domaine Vacheron, which is located on one of the many back streets of Sancerre itself. This was in 1993, and I remember the emotions of that discovery with great clarity, even if I am certain some of the detail is now faded and erroneous.

Although today the curiously named Place Nouvelle Place, which is the closest Sancerre has to a town square, feels built-up and quite cluttered, twenty years ago it was more open and peaceful, and I personally think it had more charm. Around the square there were (and still are) many cafes who would place their tables well out in the centre of the place. Taking a seat at one of the tables, I summoned a waiter from the Café des Arts with a raise of an eyebrow that even the late Roger Moore would have been pleased with. Two minutes later I was in receipt of a long and cold beer, a very welcome development after several hours in the driving seat, having just driven up from Vouvray. On this warm day the second beer, which the mind-reading waiter brought out just before I realised I was in need of it, was no less refreshing than the first. 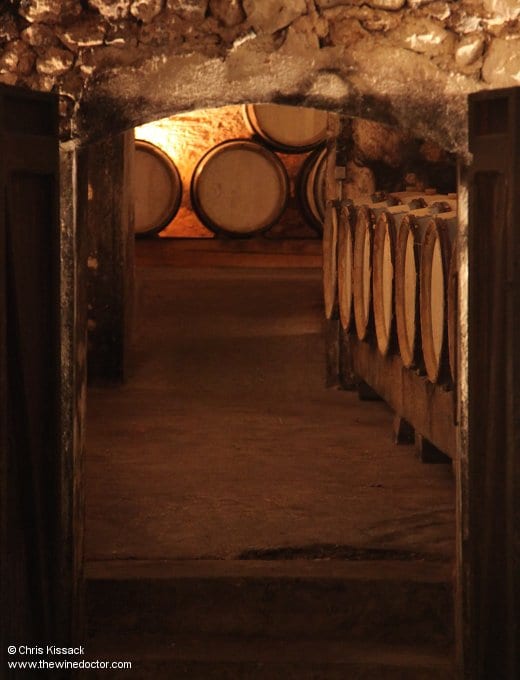 After draining my second early-afternoon glass and settling the bill I struck out, thoroughly revitalised, to explore the town of Sancerre on foot. If I had set out north and east I would soon have found myself on the Rempart des Augustins, which affords a fabulous view over the valley of the Loire, and across to the vineyards of Pouilly-Fumé. As it was, I must have wandered in the opposite direction, because pretty soon I found myself in the tasting room at Domaine Vacheron. Admittedly, this is where my memory fails me somewhat, because to this day I recall a tasting room on the edge of the town, on one of the roads that career downwards towards the plains and valleys around the town. These days, however, I am very much aware of Domaine Vacheron’s location at the junction of the Rue Serpente and the Rue Puits Poulton, well within the walls and remparts of the town. Here are their winemaking facilities, and also one of many entrances to the cellars (pictured above) which fan out beneath the streets of Sancerre.