This has been another quiet week on Winedoctor, as I have spent the last three days at Wine Paris, an increasingly significant salon which, since its inception as Vinovision just four years ago, now seems to be exhibiting exponential growth. Having initially taken over one hall of Paris Expo, this year it stretched across two, and was joined by a second event, Vin Expo Paris, essentially trebling the size compared to last year’s event. There were more exhibitors than ever from the Loire Valley, and while there I bumped into half a dozen well-known Ligérian vignerons (naming no names!) who had no stand but had decided to visit for just one day to scout it out. I would be very surprised if some or indeed all of them don’t take up a stand next year.

Having built up a handsome step count trudging between the halls I flew back from Paris last night and opted for that well known cure for salon-induced fatigue, Bonnezeaux. I regard Bonnezeaux as potentially one of the Loire Valley’s greatest appellations. It has a broader and more open aspect than the butte on which Quarts de Chaume sits, it differs in its soil type, and unlike its more famous cousin it does not bear down directly on the waters of the Layon. This produces a different style of wine, one which perhaps depends more on passerillage than botrytis, which means (with no disrespect to Quarts de Chaume) the wines can feel more classically Ligérian than those from downriver, with a greater focus on terroir-derived complexities than the illustrious Quarts de Chaume which, in great vintages, is quite rightly built around a heady presence of noble rot. 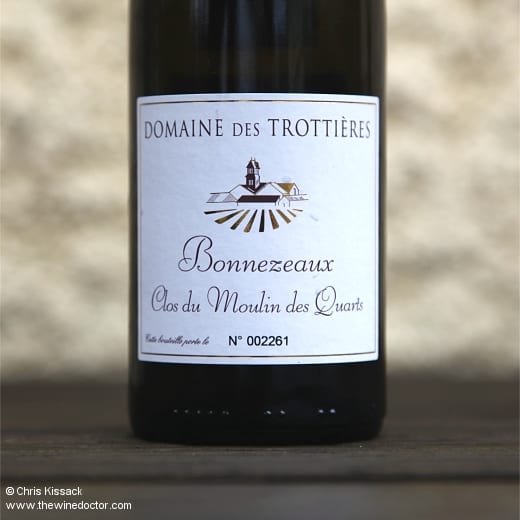 The problem is we Chenin fans face is that the appellation is under-exploited, and it lacks a flagship domaine; the obvious candidate would be, of course, Château des Fesles. A jewel in the appellation’s crown, it was sold by the Boivin family at the height of its success (after the brilliant 1989 and 1990 vintages) to a renowned pastry chef, the late Gaston Lenôtre (1920 – 2009). One of Gaston’s obituaries read that he sold the property in 1996 after “investment and improvements”, but it might be more accurate to say that he sold it at a loss after several disastrous vintages (i.e. the run from 1991 through to 1994). Today the property is run by Grands Chais de France, and it has never regained the lustre it possessed during the 20th century.

Meanwhile, other vignerons in the region – such as Mark Angeli and the proprietors of the all-but-abandoned vineyards of Château de Bonnezeaux – have turned over their vineyards to the production of dry wines. Not putting all your eggs in the sweet-wine basket is a necessity in modern times (as seen throughout Sauternes and Barsac, and in Quarts de Chaume with the creation of the Ronceray designation, a topic for another time) but preferably as an adjunct rather than ousting the sweet wines from the cellar altogether. One domaine remaining true to the appellation is Domaine des Trottières, an estate founded in 1890, run by the Lamotte family since 1985, and today turning out the full range of Anjou styles from an extensive vineyard which includes just under 1 hectare in this famed appellation. Their Bonnezeaux Clos du Moulin des Quarts 2013 (bottle number 2261) displays an appropriately golden hue in the glass, and it opens with a nose of sweetly concentrated fruits, touching on melon, sweet pear and candied apple, with fruit purity the focus here, dusted with a little white-pepper spice. The palate maintains this focus on sweetness rather than noble rot, presenting a plush texture filled with tropical fruit salad, as well as little notes of glazed cherries, grilled pear and caramelised apple slices, all cut through with a fresh and pithy acidity. It is long and intriguing, with a gentle touch of sourness to the fruit in the finish, the acidity of the 2013 vintage – in which the sweet wines were small in volume and hard-won – coming through here. All in all this is a clean and charming style, which may evolve well, but which I suspect only hints at the potential of the Bonnezeaux terroir. 92/100 (13/2/20)