At this point in January I am normally counting down to my first trip of the year to the Loire Valley, to check out the latest vintage, but I think we all know very little this year is going to be ‘normal’. As it stands, many of Europe’s major wine events, such as the Salon des Vins de Loire and Wine Paris, have been postponed, in the case of the former by only two months, which seems rather optimistic. Others, such as Millésime Bio, have gone digital, while Prowein 2021 has been cancelled (and I can’t help thinking some of those so far ‘postponed’ events may eventually go the same way).

Even without the disruption brought about by Covid-19, not to mention the closure of borders intended to combat its spread, there is also the question of Brexit, the impact of which on travelling journalists has yet to be fully understood. The year brings many unknowns.

While I wait to see what the year has in store for us I will content myself with diving into the cellar for bottles so far ignored. I start this week with a wine which I acquired a couple of years ago but which arrived at my cellar door too late to be included in my Loire 2015 at Three Years report. It is from Thierry Germain, who through his focus on obtaining the purest expression of the harvested fruit, whether it be Cabernet Franc or Chenin Blanc, and of the Turonian limestone terroirs of Saumur and Saumur-Champigny, has succeeded in asserting himself as one of the leading vignerons not just in these appellations but in the entire Loire Valley. 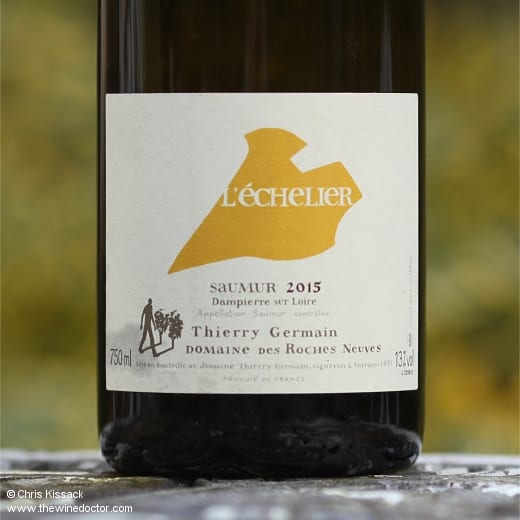 The cuvée in question is one of two site-specific white wines Thierry introduced to his portfolio a few years ago. It comes from the Clos de l’Échelier, a site in the old commune of Dampierre-sur-Loire (which was absorbed into the commune of Saumur in 1973). The 1.8-hectare clos in question is situated at the side of the Rue de l’Église, right on the edge of the Saumur plateau (romantically described by many as “overlooking the Loire”, although in truth it is a challenge to see the river for the trees). It is planted with both Cabernet Franc and Chenin Blanc, and thus it contributes both red and white cuvées to the portfolio. Initially both were released under the name Clos de l’Échelier, but with my Loire anorak on I have to point out that the name of the white cuvée was shortened to just L’Échelier in the 2014 vintage. This change of name seems to have been entirely overlooked by many (including me, for a while).

The vines are rooted into 30 centimetres of clay soil, laid on top of a deep bed of Turonian limestone. The vines were propagated by massale selection, and like the rest of the domaine they are cared for using fully certified organic and biodynamic methods. The fruit is hand-picked, gently pressed over about four hours using a pneumatic press, and the juice vinified in 600-litre demi-muids, followed by an élevage on the lees lasting about nine months. In the glass the 2015 Saumur Blanc L’Échelier from Domaine des Roches Neuves has a polished, straw gold hue. It feels classically taut and restrained on the nose, smoky with notes of dried yellow plum and yellow peach at first, with a little matchsticky vein. Then comes the crushed limestone and more aromatic nuances, of vanilla flower, acacia and orange pip, and it seems to me that this is evolving nicely. This aromatic profile is matched by an intensely focused palate, strict but balanced, vibrating with taut veins of mineral and acid. These structural elements give it a mouthwatering sense of vigour, and as if to drive home the message it finishes with a firm acid cut. This is a great wine, but it needs time to reveal its true merits. It is a wine for mineral and acid fans only, and those among them with the patience to leave it in the cellar for another five years. Or more. 95/100 (11/1/21)