It seems only fair that as an antidote to the forthcoming near-anaphylactic attack of Bordeaux, with my 2010 reports set to take over Winedoctor for most of April, we should look elsewhere for my Weekend Wine. And I don’t think we should have anything too run of the mill to counter the Bordeaux domination; this calls for something a little more alien than the polished performance we might expect from the likes of Latour, Lafite or Léoville-Las-Cases. Let’s have something that doesn’t call to mind overly immaculate white-gravel vineyards, grand or even semi-ecclesiastical châteaux of polished, creamy-white stone, and barrel samples sold as wine by wealthy men and women dressed more for the office than the vineyard. For although I love Bordeaux and its wines, I am glad that this image does not encapsulate the entire world of wine. Elsewhere, distant from the Gironde, there are vignerons who, although less polished in their presentation, are no less capable of fascinating with their wines. 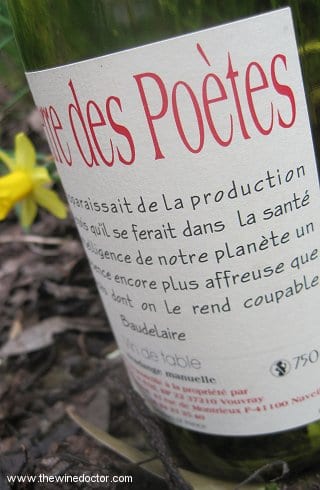 So this week and next, and perhaps the week after, I’ll be featuring wines which are as distant from those produced in Bordeaux today as I can imagine. This week it is the turn of Domaine de Montrieux, home to Émile Hérédia, a particularly good destination when looking for such a wine. Émile is based in Naveil, very close to Vendôme, a little distance north of Tours. Although this onetime photographer only began his work at this domaine in 1999, his 6 hectares of vines, scattered across 14 tiny parcels along the border of the Loir, are more ancient than that date might suggest. Of his 1 hectare of Chenin Blanc and 5 hectares of Gamay and Pineau d’Aunis (also occasionally known as Chenin Noir), the latter vines average 55 years old, and among them there are some that boast more than 100 years, vines that were planted on their own roots long before phylloxera made such practice seem as eccentric as it does today.

The fruit of these ungrafted Pineau d’Aunis vines makes up this week’s wine, augmented by fruit from Hérédia’s less ancient grafted vineyards, some of which have been planted by Émile very recently, the vines propagated from his own vinestock. The entire domaine is certified as organic, and there is minimal intervention in the cellar. With this cuvée in particular the fruit is fermented whole in a sealed cuve, in an extreme version of carbonic maceration; instead of allowing the fermentation to complete in oxygen, as with conventional carbonic maceration, the cuve remains sealed, the berries macerating in the embryonic wine for as long as three months. Thereafter the wine is run off rather than pressed, filtered and bottled with sulphur dioxide. It is bottled as a vin de table, therefore the vintage is not declared although it is not to difficult to deduce exactly what we are drinking. First, the labels feature French poets, the author and poem changing with each vintage, and this helps somewhat with identification; in 2008 it was the turn of Baudelaire as shown above. Even more reliable is the lot number – this is L.0081, which as you might imagine refers to the 2008 vintage.

As for the wine inside the bottle, the 2008 Le Verre des Poètes from Émile Hérédia has a dark, black cherry hue, although it does not have the opaque colour that description perhaps suggests. It is dusty and solid rather than bright in appearance. The fruit is rather restrained in character, matching the palate, a melange of withdrawn strawberry and cherry aromas, with a subtle if rather warm spice to it. The palate starts off rather solidly polished, a bit of a billiard ball of a wine, the alcohol I think (it has 14% on the label), but then through the middle it relaxes and allows through not only some very chalky, perfumed, violet-tinged fruit and crisp, nettly acidity, but also plenty of the trademark Pineau d’Aunis pepper and spice. It certainly has a very crunchy style of fruit, with the tingle and razor that suggests it is on the edge of ripeness, more so than I expected from the wine’s rather dark appearance. Despite this the alcohol does come through a little in the texture as noted above, but this is not in any way aggressive; there is no heat or burn to it. Just pepper! A short finish.

Although I’m not a huge fan of Pineau d’Aunis in red (it can produce stunning rosé in the right hands), this is nevertheless an attractive wine, with no shortage of vibrancy, freshness and individual character, and I would much rather drink this than see the vines disappear from the Loire’s landscape for ever. Bravo, Émile! 15.5/20 (4/4/11)