I had cause to give thanks this weekend. While I live under the rule of arguably the most incompetent and corrupt government the UK has seen in decades if not longer, and the nation slides towards economic ruin and the dissolution of the union consequent upon Covid-19 and Brexit, I recognise that I live in what is still a relatively stable and peaceful society. Look across the wine-producing nations of the world and it is clear that not everybody is so fortunate. The situation in South Africa is very difficult for many, as I noted in my report on the 2017 Terre Brûlée Chenin Blanc from Vincent Carême just a few weeks ago. The explosion in Lebanon last week, bringing devastation to much of Beirut with terrible loss of life, was another reminder that not every vigneron works within the bucolic and pastoral landscape so commonly imagined.

As it happened among my line-up of samples for tasting I had this Weekend Wine, the 2018 Ixsir El (or El Ixsir, which of course calls to mind elixir, if you prefer) which is indeed from Lebanon. To be frank I have never looked much beyond my old favourite Chateau Musar in this country before now, and it was thus fascinating to taste this wine, from an estate which was created relatively recently, in 2007. The name Ixsir is a nod to the original Arabic word for elixir, which was iksir. The company’s principal founders were Étienne Debanné and Gabriel Rivero, the latter the current technical manager, with some backing from French-Lebanese businessman Carlos Ghosn. If the latter name sounds familiar a quick search on your favoured search engine should jog your memory. 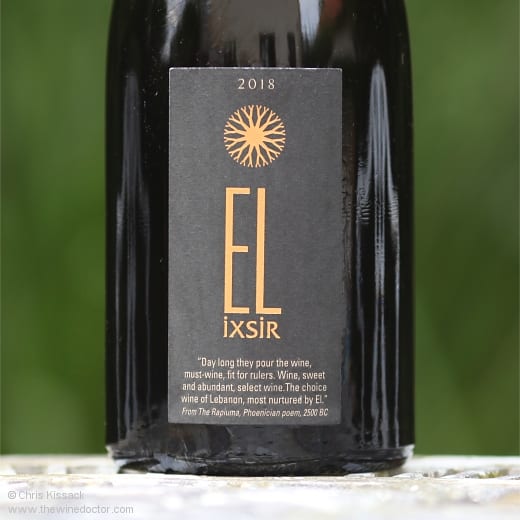 The original Ixsir concept was the revival and replanting of long-forgotten vineyards, at sites ranging from Batroun, a coastal site and historic port to the north of Beirut, to Jezzine, which lies inland a little, to the south. The cellars are also located inland, at Bezbina, in the mountains above Batroun; although these sit in the shadow of an ancient farmhouse, built in the 17th century, the facilities are very modern and have picked up a number of accolades for sustainability. Some vineyards extend well up into the mountains, to an altitude of 1,800 metres, making these some of the highest vineyards in the northern hemisphere. Despite the broad spread of the vines the soils are largely limestone and clay, and the varieties planted cover all bases, indigenous and international cultivars rooted side by side.

The 2018 El Ixsir Blanc is a blend of 70% Viognier and 30% Chardonnay, aged in oak barrels for twelve months before bottling. The Viognier comes from the Niha vineyard in the Bekaa Valley, at an altitude of 1,200 metres. The Chardonnay comes from Kab Elias, a little further south, but still at an altitude of 950 metres. The fruit is picked by hand and the wine aged in oak barrels. Gabriel Rivero can call on Hubert de Boüard de Laforest for advice if required, as he has advised the Ixsir team since the very first vintage. It starts off with a cracking nose which is very true to the lead variety, with notes of apricot stone and pine kernel to the fore, followed up by salty preserved lemons, chalk and perfumed verbena. The palate carries that same contradiction, with ripe citrus and orchard fruits set against notes of pine kernels, lemon balm, white pepper and smoky crushed chalk. It carries a lovely bitterness, wrapped within a silky-velvety texture, with a long and again lightly bitter finish. The alcohol is perhaps not as high as you might think (the label declares a very precise 14.2%) but it is not exactly strong on acidity, nevertheless there are lots of other interesting phenolic and structural elements here, and it feels fresh, mainly thanks to its amaroidal substance as well as its lithe and sinewy poise. 91/100

It’s a good result and I look forward to seeing more from Ixsir, so I hope Lebanon as a whole can overcome its current difficulties and become stronger. I have just one suggestion for the Ixsir team though. Have you thought about planting Chenin Blanc? On those soils, in that climate, it could surely be a winner. (10/8/20)