While my cellar is dominated by the wines of the Loire Valley and Bordeaux, naturally at the expense of some other regions and countries, there are some wines and regions I will never let go of. Among these styles are the fortified styles of Europe; that means mostly Port, a style I have been busy hoovering up since my student years (although, sadly, the days of picking up 1970 and 1977 Vintage Ports for a song in my local Oddbins have long left us). In more recent years these wines have been joined in the racks by representatives from Jerez, Madeira and even the occasional interloper from Maury or Banyuls.

As with any other corner of the cellar you need to keep stocks turning over (this is a euphemism for drinking, so it’s no hardship). Most recently I have been topping up with wines from the 2017 and 2016 vintages, as well as a couple of cases from a more mature vintage, 2000. So that means I need to make a little room, and as I did so I was slightly surprised to come across a couple of bottles of 1985 Fonseca. I couldn’t remember from where I had bought them, the last time I broached one, or how they might be tasting right now. There’s not much I can do about the first two uncertainties, but there’s an obvious and easy solution to the third. Especially as it’s that ‘Porty’ time of year. 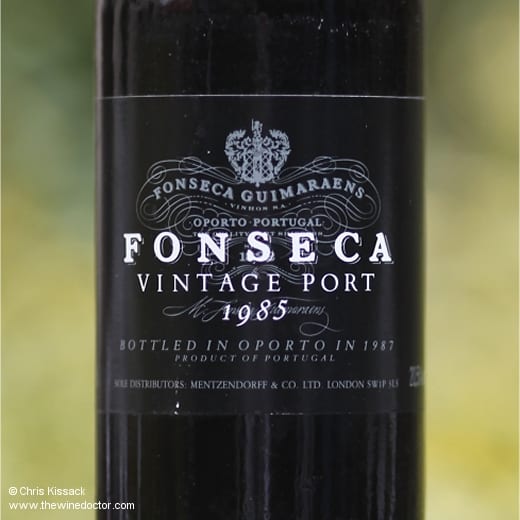 Moving on from the 1970s which were once my focus, the 1980s was a modestly generous decade when it came to those with a penchant for the Douro’s most famous product. The most widely declared vintages were 1983 and 1985, but a number of other vintages were of equal if not greater interest. The 1980 vintage was overlooked by many, but it produced some attractive and approachable wines, and I have long enjoyed the 1980 Warre’s in particular. The 1987 vintage nudged the sort of quality required for a declaration, but most houses opted to release single-quinta wines instead, among which I enjoyed the 1987 Quinta de Vargellas from Taylor’s.

Since its declaration the reputation of the 1985 vintage slipped somewhat. Many wines seemed to deteriorate in bottle, developing acetic notes. Exactly why this is has never been clear, but happily some houses – notably Taylor, Fonseca, Warre and Dow, among others – do not seem to have been affected. Indeed, as it hits 35 years of age, the 1985 Vintage Port from Fonseca still feels to me like it would benefit from further time in bottle. Unusually for a wine of this age, the cork comes out in one piece, and is in beautiful condition. In the glass the wine is dark and rich in pigment, still almost opaque, with a dusty, claretty rim. The aromatics are charming, a melange of smoked dark cherries and currants and sooty elements, along with a subtle touch of dried fig. This precedes a beautifully correct palate, warm and yet tense, velvety yet with evident structure beneath, spiced and with a spirity energy, warming in the finish, and lingering well in the length, with a long, savoury and lightly salty character. An impressive wine which, even at this age, clearly has yet more to give. 96/100 (28/12/20)