While there are a number of smaller or less well-known domaines in Saumur producing sparkling wines (if you are looking for suggestions, Château de Montgueret, part of the Grands Chais de France empire, is worth a try) the appellation is, like Champagne, dominated by the large sparkling wine houses, most of which are based in Saint-Hilaire-Saint-Florent. Quality varies among them, and when I waved my magic Chenin-fuelled wand to create Winedoctor twenty years ago it seemed to me that Langlois-Chateau and Bouvet-Ladubay turned out the best wines, as well as being run by the most proactive and engaging people. Two decades on I suspect this very broad brushstroke view of the appellation hierarchy remains true, although I confess I am guilty of not having tasted through the range from some of the region’s other houses for some time.

While Bouvet-Ladubay remains a giant within the appellation, it remains a family controlled firm, much like some of my favourite domaines in Vouvray – Vincent Carême, François and Julien Pinon and Philippe and Vincent Foreau, for example – which is my other favoured source of sparkling wines. It hasn’t always been this way of course; created by Etienne Bouvet who died in 1908, the domaine was acquired many years later by the Monmousseau family. Several generations looked after the house until in 1974 Patrice Monmousseau sold it to the Taittinger Group, who subsequently sold it to United Spirits. It was only in 2015 that the Monmousseau family, who had stayed on to manage the company, succeeded in buying it back, with the assistance of three private equity firms. Today Juliette Monmousseau, the great granddaughter of Jean-Marcel Monmousseau who bought the company in 1932, is responsible for its day-to-day running. 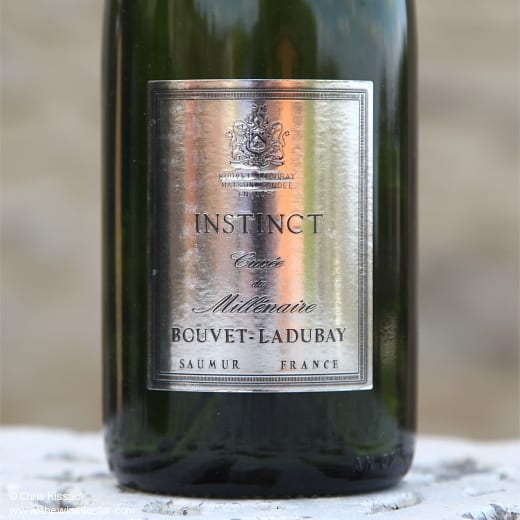 With access to a huge area of vineyards and expansive cellars, including new facilities in Distré to the south of Saumur (which have the look of a gigantic logistics and distribution centre, but as Schrödinger once made clear it is what’s inside the ‘box’ that counts), the range of wines at Bouvet-Ladubay has long been broad and potentially confusing. There are, however, a number of cuvées worth following, not least Trésor which I include in my Loire Valley vintage reports whenever possible, and I would recommend following Ogmius too were it not a one-off single-vintage project. One other cuvée equally worth following and which thankfully pops onto my radar now and again is Instinct.

One of a number of limited-production cuvées, Instinct was created during the Taittinger era, its first vintage having been 2000, hence the Cuvée de Millénaire declaration on the label. It is, as is usually the case here, mostly Chenin Blanc (the minimum requirement for the appellation is 60%) topped up with a little Chardonnay, one of the distinguishing features being the initial aging of the base wines in oak barrels before they are blended and introduced to the bottles for the prise de mousse. The 2015 Saumur Brut Instinct (bottle no. 6456) from Bouvet-Ladubay displays a pale straw hue in the glass, and a plentiful bead. It has an expressive and enticing nose, filled with orange pip and preserved lemons, with some notes of crushed limestone rocks suggesting tension. There follows a full, soft and generous pillow of a palate, one which brims with fruit beyond the citrus elements seen on the nose, here revealing apricot skin, poached pear and a touch of mango. It is charming and supple, with a diffuse mineral core, nice acidity but a weighty texture which might reflect the dosage but could equally be a reflection of the generosity of the 2015 vintage. Rather broad in style, this could be really great if the exuberant fruit and great breadth were framed by a tighter structure on the palate. Even as it stands, however, this is still a delightful, crowd pleasing wine. 92/100 (20/1/20)