Fifteen Years On: The 2005 Vintage

Fifteen Years On: The 2005 Vintage

Old hands who have been scouring the pages of Winedoctor since its launch in May 2000 (yes, it really is twenty years since I started all this) will know that every year I pull a few older bottles from the cellar, usually from regions other than Bordeaux and the Loire Valley, for anniversary tastings. While I have stopped doing this for wines that have just hit ten years of age, preferring instead to focus at this stage on the Loire Valley (and, when I can, Bordeaux), I will for the moment continue on with tastings at fifteen, twenty and occasionally twenty-five years. Indeed, it was only last month that I published this year’s Tasting of the 2000 Vintage at Twenty Years.

The wines are usually random collections of (mostly) European wines, often featuring old favourites that I discovered many years ago, such as Château de Beaucastel and Château Musar. Back in 2005, however, I must have been going through a German phase, as the vast majority of wines I tucked away in the cellar (those that weren’t from Bordeaux or the Loire Valley, of course) originated from the vineyards along the Mosel, Saar, Ruwer, Rhine and Nahe rivers. I did find the odd bottle of Chablis and Madeira but in the end it made sense to stick exclusively with the Germans, probably a wise decision as the Chablis had long given up the good fight against oxidation (although as you might expect the Madeira was still going strong). 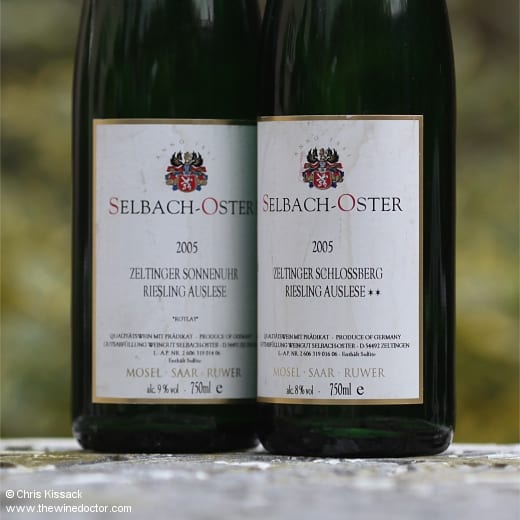 And so, in this years Fifteen Years On tasting report, I present fifteen tasting notes on German wines of the 2005 vintage. Before I get to my notes, a few brief words on the vintage.