That the name of Dagueneau is today incontrovertibly linked with the Pouilly-Fumé appellation is of course down to one man, the late Didier Dagueneau (1956 – 2008). His story is already well-known. What is sometimes forgotten is that he was but one of a broad clan of vignerons working in this appellation who also carried this name, many of whom (in truth, surely all of them) were related. Two of them work in near-adjacent cellars located in Les Berthiers, a small hamlet on the road which leads up to Saint-Andélain, which was where Didier chose to establish himself when he returned to the appellation.

One of these is Jean-Claude Dagueneau, Didier’s father, his cellars sitting overlooking the crossroads at the bottom of the road before it climbs through the hamlet and up the hill. The second, almost his neighbour, is Serge Dagueneau, Jean-Claude’s brother and therefore Didier’s uncle. While today the Dagueneau crown, if there could be such a thing, rests lightly on the head of Louis-Benjamin Dagueneau, Didier’s son,
the wines of Serge Dagueneau and his daughters should not be overlooked. The domaine has a long history in the region, and the wines have a strapping character. 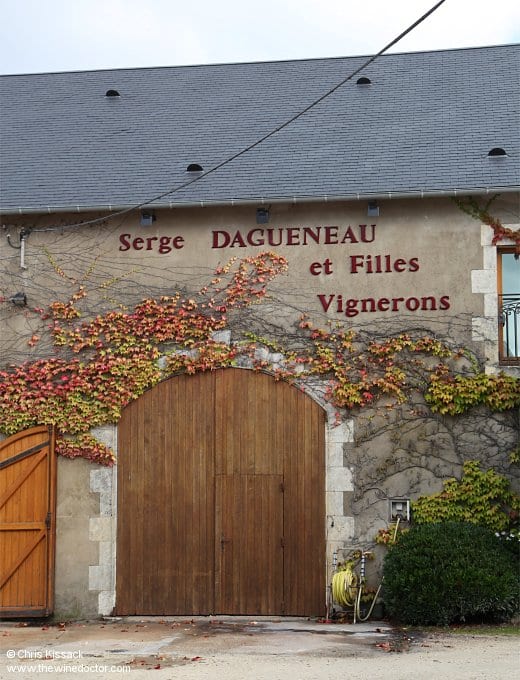 The domaine’s origins may be traced back to a matriarchal figure who came into this world as the end of the 19th century drew near. This was Léontine Dagueneau (born 1889), a hardworking agriculteur who, having been widowed, single-handedly tended to her smallholding. She had 2 hectares of vines, but she was also busy tilling the soil for her vegetables and caring for her livestock, both cattle and goats, the milk from which she used in the making of cheeses, which were apparently of some renown.