After getting my hands on two very nice examples of Beaujolais from the 2007 vintage, the labels bearing the names of top vignerons Jean-Claude Lapalu and Jean Foillard, I have been keen to take a look at the 2009 vintage. In the first instance that’s because, as I mentioned in the above linked article, 2009 has been a succesful year for the region, causing a bit of a buzz with merchants and in online wine forums. And secondly it’s a region in which I do have some interest; an oft-overlooked underdog, the Beaujolais region is a rich hunting ground for those seeking out genuinely unique wines of vigour and freshness. When you find a good one, it can be really, really good.

Beaujolais also has some themes in common with the Loire (just to keep reading Loire-heads happy). It is of course a hotbed of natural winemaking, and fans of these wines have recently had to mourn the passing of one of the icons of natural wine, Marcel Lapierre, a vigneron and resident of Morgon who died a week or so ago. Other names inextricably tied up with Beaujolais and natural winemaking include the late Jules Chauvet, a Beaujolais négociant widely considered to be the father of the natural wine movement. You can find a common vein in variety too; Gamay is no stranger to the Loire. Not just Gamay de Bouze, the teinturier variety, but the Gamay Noir of Beaujolais can also be found planted in Ligérian vineyards.

Tracking down individual bottles can sometimes present a challenge (another feature in common with the Loire!). I was expecting the arrival of four bottles of 2009 Beaujolais in a shipment, but before they arrived the sender contacted me to say only three were coming; the fourth hadn’t arrived in the UK yet. Of those three, one was a Beaujolais Blanc, marginally less interesting in itself (although some soils around Beaujolais do favour white varieties over red of course, and we should gove this wine as much due consideration as any other) but it also turned out to be from 2008 not 2009, so it didn’t really satisfy my quest on two counts. Of the two that remained in the game I was thrilled to find one of them, the Fleurie Chapelle des Bois 2009 from Domaine de la Grand Cour, brought with it all the defined vigour and fruit-rich freshness that I had hoped for considering the reputation of the vintage. 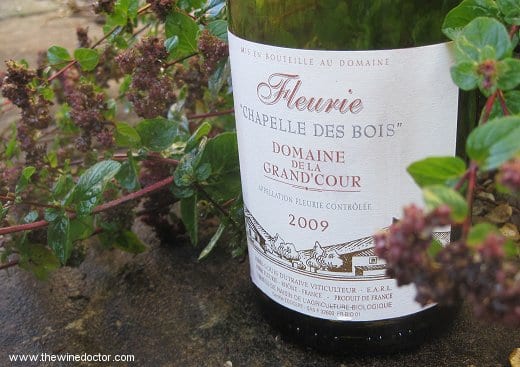 The 10.7 hectares of the Domaine de la Grand Cour belong to the Dutraive family, with a focus on Fleurie (9.1 hectares) over Brouilly (1.6 hectares). The practices at the domaine tick all the right boxes: the viticulture is free of chemicals and in fact the entire vineyard has been turned over to organic viticulture completing the conversion (Ecocert certification) with the 2009 vintage. The fruit is picked by hand and then fermented at low temperature by indigenous yeasts without addition of sulphur, the élevage is in oak barrels or foudres, and the finished wine bottled without fining or filtration. The end result is admirable, the 2009 Fleurie Chapelle des Bois has a really intense colour, the dark red-black hue of a ripe black cherry, but with a shimmering vibrancy in the blackness rather than a dense or solid character. The nose takes 30 minutes or so to open up, but as it does it releases an explosion of crunchy plum skin and cherry stone fruit, with an ethereal, lifted, stony freshness. There are little touches of steely-smoke, and a fine depth to the fruit too, but nothing can distract from the vigour and vibrancy this wine possesses. The palate is just as bright and as defined as the nose suggests, with a crystallised and perfumed fruit character, but also with a fine texture giving it a little layer of substance underneath. There are nuances of violets, and the whole stony-crispy-juicy substance of the wine fired up by a broad layer of acid which trumpets its presence at the end of the palate. This is a very impressive, pleasing wine. Hats off to Jean-Louis Dutraive and to the 2009 vintage! 17/20 (8/11/10)