Among the serious red wine appellations it could be argued that St Nicolas de Bourgueil is one of the most misconceived. The arbitrary line drawn between this appellation and its neighbour Bourgueil doesn’t help, suggesting there is some distinction between the two, perhaps something more to be understood here. This is despite the fact the two appellations are so similar they are more akin to identical twins than mere siblings. This should not dissuade us from exploring this two appellations. Indeed, are there any other appellations in the Loire Valley so rich in undiscovered and under-appreciated gems, especially at the redder end of the colour spectrum, as Bourgueil and St Nicolas de Bourgueil? I am struggling to think of one.

Domaine du Mortier is one such gem, a domaine born of youthful enthusiasm and determination. The Boisard family had never made wine, but in the mid-1990s they moved to the region, buying an old vigneron’s house nestled among the vines, complete with a tiny parcel of Cabernet Franc, not even a hectare. It was not the Boisard père and mère who were drawn to the new viticultural possession though, but their sons Cyril and Fabien, at the time mere teenagers. Seeing their interest, the vigneron who had until that time looked after these vines showed them how to prune and pick, and how to vinify the crop. The young brothers were now unofficial vignerons. It wasn’t long before the elder of the two, Cyril, had enrolled to study oenology at Montreuil-Bellay, and with the (financial) help of their father they purchased another few hectares of vines. And so Domaine du Mortier was born. 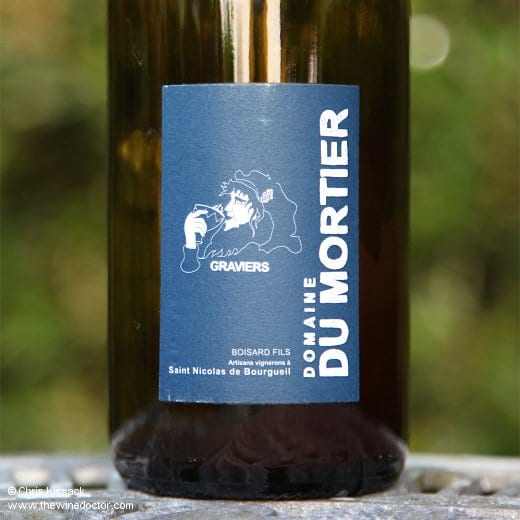 As you would expect the brothers make a range of wines, as the St Nicolas de Bourgueil appellation (and this is entirely true of its twin Bourgueil as well) encompasses sandy soils close to the Loire, gravel and clay terraces higher up the slope, and of course the desirable clay and limestone terroirs at the very peak. At the heart of their portfolio is the Les Graviers cuvée, sourced from 2.5 hectares of vines which are, as suggested by the name, planted on the more gravelly midslope. The soils are particularly thin here, less than a metre of flinty gravel mixed with clay, over the limestone bedrock. The fruit is picked by hand into small crates, at a yield of 43 hl/ha in the case of the 2014 vintage, sorted over a traditional table (a step in the process often omitted in the Loire Valley, even at some very highly regarded domaines), destemmed and then passed to a cement fermentation vat by conveyor belt.

Today the brothers work biodynamically in the vineyard, and with a very judicious approach to sulphite additions in the cellars, certainly avoiding using any before the fermentation gets going. After about twenty days of skin contact the wine goes into foudres and barrels for about ten months before bottling. The end result, the 2014 St Nicolas de Bourgueil Les Graviers from Domaine du Mortier, displays a glossy and moderately pigmented hue in the glass. The nose is just a dream for lovers of savoury wines rather than the slick and glossy style that is often encountered today, with dried blackcurrant and brambles on the nose, lightly stalky and smoky, ripe though, nuanced with some green peppercorn notes. The palate is lip-smacking and nicely grained, with a peppery energy to the fruit, as well as a savoury and grained element. It has a little lick of tannin, a tight texture to cope, and the acidity of the 2014 vintage; put it all together it is no surprise that this is a joy to drink. I would suggest popping the cork now, but there would be no harm in waiting to see what happens if you were to leave this in the cellar for another two or three years. 93/100 (4/11/19)